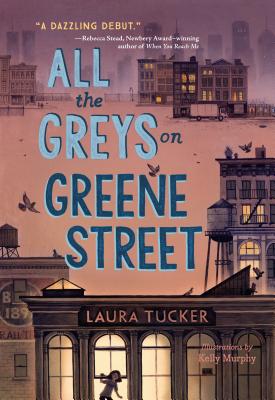 This superb middle-grade novel introduces readers to a young artist who finds herself at the center of a mystery. Ollie’s parents are both artists. Her father and his partner Apollo restore art work and her mother creates sculptures. But then one night, her father leaves for France with his new French girlfriend and her mother won’t get out of bed. Ollie fends for herself, eating apples and peanuts, meeting Apollo for meals out, and protecting the secret of her mother’s depression. She spends time with her two best friends, Richard and Alex, throughout their Soho neighborhood. Ollie discovers that there is more to her father’s disappearance than she thought and is determined to find out what is truly going on.

Filled with compelling characters and a mystery worth sleuthing, this novel is a delight of a read. Tucker uses the setting of New York City as a vivid backdrop to the tale. Soho itself serves as almost another character in the book with its lofts for artists, empty buildings, and occasional illegal poster hanging. When Ollie and Alex head to an island getaway, that setting too is beautifully depicted as a foil to the city and is equally celebrated too. Her writing is deft and nicely keeps the pace brisk and the questions about Ollie’s parents fresh.

All of the young characters in the book are fully realized and each have a distinct personality that makes sense and carries through the title. Apollo, a giant of a man who serves as a rock for Ollie in this tumultuous time, is also a well depicted character. Ollie’s mother is an important character whose depression keeps the reader from knowing her better. The subject of parental mental illness is handled with frankness and the book concludes with a sense of hope.

A fresh mix of mystery, art and secrets, this book is full of vibrant colors and not just Greys. Appropriate for ages 9-12.

Reviewed from ARC provided by Viking.