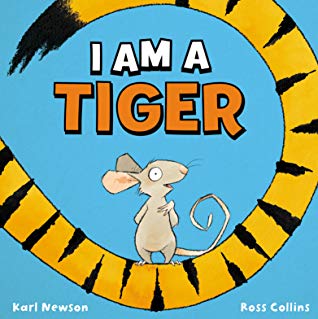 A very confident little mouse declares that he is actually a tiger. The other animals don’t believe him at first, but he manages to demonstrate that he can growl like a tiger, climb trees like a tiger and even hunt for his lunch. When a real tiger comes along, the mouse declares that the tiger is a mouse! After all, the tiger has a twitchy nose, little hands and feet, and probably ate cheese recently. Mouse continues to show that he has all sorts of tiger-like skills. The defeated real tiger asks then what the other animals are and Mouse gives them all sorts of new identities, including a banana and a balloon. When Mouse leaves and gets a glimpse of himself in the water though, he realizes that he isn’t a tiger after all. Maybe he still isn’t a mouse either?

Newson’s writing is brisk and bright. Done entirely in dialogue, this book begs to be shared aloud with children. Children will love the confident little mouse and his ability to make ludicrous claims and stand by them. Mouse is a great character, becoming all the more interesting when he discovers he isn’t really a tiger after all. The twist at the end is a delight that doesn’t discourage Mouse in the least. The illustrations by Collins are large and colorful. They help tell the full story of what is happening and carry a lot of the humor too.

An uproarious picture book about a little mouse with a big imagination. Appropriate for ages 2-4.