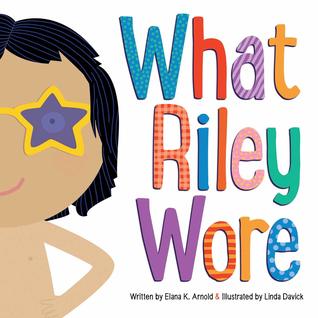 Riley loves to dress for every occasion. Riley wore a bunny costume on the first day of school, even though no one else worse a costume. At the dentist’s office Riley wore a superhero outfit for bravery. Riley wore a ballgown to dinner with Oma and Otto because they went to a fancy restaurant. Space pajamas were just right for Universe Day at school. A hard hat was ideal for a visit to the hardware store. Some days at home were perfect not to wear anything at all. When Riley wore a complicated outfit to the park, Riley was asked if they were a boy or a girl. Riley answered by talking about her outfit’s roles and joined in playing with everyone.

Arnold writes with such skill here that it is only partway through the book that readers may notice that there are no pronouns or genders shared about Riley. Every child can see themselves in Riley and be dazzled by Riley’s costumes and outfits along the way. There is a sense of merriment in all of the things Riley wears and a strong expression of identity as well.

Davick’s illustrations are filled with bright colors and a celebration of Riley’s sense of style. The mixed costumes are complicated and Davick captures them beautifully, showing exactly what Riley was trying to convey.

Ideal for kids of every gender and every way of expressing themselves through clothing. Appropriate for ages 2-5.

Harry Potter used to be the number one banned book in schools, according to Caldwell-Stone. These days, she said, books with LGBT themes are increasingly being targeted, both with lawsuits and other extreme measures, like public book burnings.

Interview: Mitali Perkins Talks of Between Us and Abuela – Fuse 8

When it comes to our relationship with Mexico, it struck me that children would have an honest response akin to the child in the old “Emperor’s New Clothes” fable (“Why is that man naked, Mama?”)

It may sound counterintuitive, but Paul cautions parents not to reward their children for reading, no matter how badly you want them to crack open a book.

Ultimately, I told the legend in a Mother Goose style of my own, incorporating poems of hers that related to her life. Vladimir’s challenge was to design and illustrate the book so as to keep the strings of text separate and understandable. We worked on the book for six or seven years. He was ill for a number of those years, so there were inevitable big gaps when he didn’t have the strength to work.

This Is Home: Renee Watson on the Importance of Setting in Some Places More Than Others – Bookish

In some novels, the setting is far more than just a location, it’s a character within its own right.

Why I Love Kids’ Books in Translation – Publisher’s Weekly

With children’s books in particular, those in translation have an added aura of adventure, even a sense of the hidden being revealed. At least they did for me. I thought of books written in English as like coming across a fortune typed in that special red ink; I thought of books written in another language as that same fortune, but with a cookie around it, a message you got to crack open for yourself.

As publishers anticipate the 2020 women’s suffrage centennial, they remain mindful of how history is presented to children. And just as words matter, so too do pictures, says Susan Van Metre, executive editorial director at Walker Books.

“A good library today is not your grandma’s library,” library director Kristin Vogel said. “Nothing against grandmas, but that shushing, that quiet, that sense of policing is very different than what a lot of people experienced in their childhood.”

The Copper Queen Library in Bisbee, AZ, is the oldest in the state. It’s older than the state itself, having been founded in 1882 and open continuously ever since. But it isn’t resting on its laurels. Once focused on mining, today’s Bisbee is a study in contradictions.

The decision to bring in a social worker didn’t happen overnight: The library staff gradually realized how ill-equipped they were to deal with certain situations, particularly those related to homelessness and drug abuse —

From romantic vampire thrillers to a feminist call to arms, if you’re a fan of YA writing, you’re in luck this autumn.

You’ll find something from every genre in this collection of fall YA paperbacks, so prepare to be swept away in a good book.

…Mary H.K. Choi is quietly defining new-adult literature with her modern explorations of how relationships help young people figure out who they really are.

Fast-forward to 2019 — with its bulgogi tacos, K-pop, snail slime masks and Sandra Oh memes — and Koreans are the new purveyors of cool. Korean-Americans are making a mark on American culture, and the Y.A. universe is no exception.

As mental health struggles get more time in the spotlight, mental health nonfiction books have been cropping up aimed a variety of demographics. In fact, many options are now available just for teens. This list looks at great resources for those who are struggling with mental health issues or want to help someone that is.