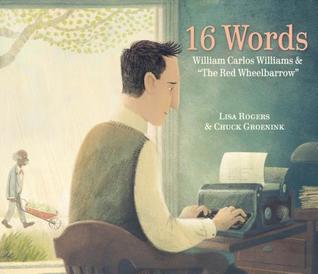 This nonfiction picture book explores the inspiration behind Williams’ most famous poem as well as the life of the poet who wrote it. The book begins with Williams on his doctor’s rounds, noticing the red wheelbarrow that belonged to Mr. Thaddeus Marshall, who works harvesting and selling vegetables in Rutherford, New Jersey. Williams uses his spare time at work writing poems and noticing small things around him. He types between office visits and takes notes as he walks through the town. Then one glimpse out of a window on a rainy day created a moment that inspired one of the greatest poems.

Rogers writes a biography focused on Williams himself and on the inspiring white chickens and red wheelbarrow. She takes time to not only capture that iconic image once but several times on the page, showing how inspiration lingers and returns. She also makes sure to linger on how Williams works writing into his role as the town doctor and how he notices small things that inspire him.

The illustrations are done digitally and feel very organically with pencil and brush lines on each page. The colors are pastel and gentle, encouraging readers to look more closely and linger just as Williams himself was doing.

A nonfiction picture book about writing, poetry and life. Appropriate for ages 6-9. 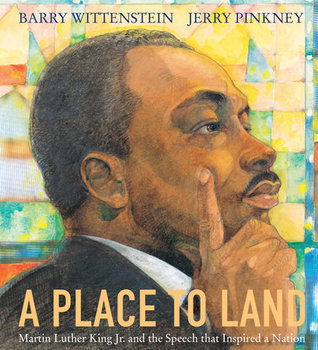 This book focuses on Martin Luther King, Jr’s “I Have a Dream” speech but in a fresh and unique way. It looks at the difficulty of writing such an important speech to be delivered before such a huge crowd. It offers glimpses of King working with a group of advisors and speech writers to come up with the right approach. Then King heads off with only one other person and works all night on his speech. He stands in front of America and gives the speech of his life, the entire thing not coming together and offering him a place to land until he is encouraged to talk about the dream and he leaves his carefully written speech behind and flies.

Written almost as a poem, this picture book offers a look at how the historic speech came to be. It shows the night before the speech in 1963, the early morning hours of writing, and finally the afternoon before of still sculpting the words, the rhythms and the rhymes. And then, powerfully, it shows leaving that carefully written script behind and following the pastors of his family into glory.

Pinkney’s illustrations are so personal and filled with strength. Readers can look into the weary eyes of King as he continues to draft the speech despite not sleeping the night before. They can see the diverse crowd gathered in Washington, D.C. and almost hear the noise of it. They can certainly hear the echoes of King’s voice emerge from the images on the page as his voice soars.

Superb both in writing and illustration, this is one for every library. Appropriate for ages 6-9.