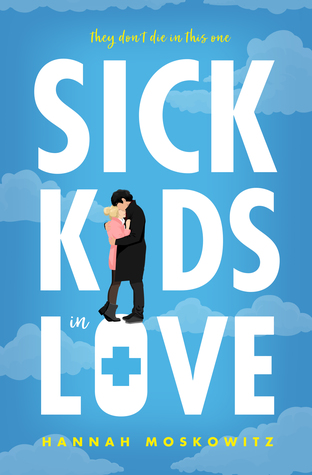 Isabel loves to ask everyone else their opinions. In fact, it’s what she does for her high school paper column. It helps her make sense of a world where her mother just walked out of their family a few months earlier, leaving Isabel with her father who works most of the time as a hospital administrator. Isabel also spends a lot of time at the hospital, both because it’s where she gets to see her father most, but also because it’s where she gets her treatments for her rheumatoid arthritis. While at the hospital one day, she meets Sasha, a boy who also has his own non-fatal illness. The two hit it off, not dating though because Isabel has rules about dating. Soon Sasha and Isabel are spending a lot of time together. They adventure in New York City but also take lots of naps, don’t walk too far in the cold, and handle a lot of nosebleeds. Now Isabel must figure out if she’s going to start dating for the first time, or stick to the rule.

I have to mention that I worried I was in for a tear-jerker of a book and that it would be a lot like John Green’s A Fault in Our Stars. Those fears went away as I realized that Moskowitz was tackling invisible illnesses, the ones that people have but that don’t threaten their lives, just impact them in a variety of ways. This novel is so lovely, filled with first love, the pressures of whether to change for the other person, and the gorgeous connection that can happen again and again with another person. It’s a novel that balances beautifully the impact of being sick with the delight of being alive.

Isabel and Sasha are both great protagonists. Isabel is wonderfully prickly and sarcastic, unwilling to change for a boy but also worried about the sort of person she is inside. Sasha too is sarcastic but very different from Isabel. Their two families are different too, Isabel left behind by her mother to live mostly alone and Sasha surrounded by a loving family who boisterously support him and what he needs. Yet the two of them make sense, clicking in a way that only the best romantic couples in books do.

A great romance that grapples with illness alongside love. Appropriate for ages 12-15.

Reviewed from e-galley provided by Entangled.