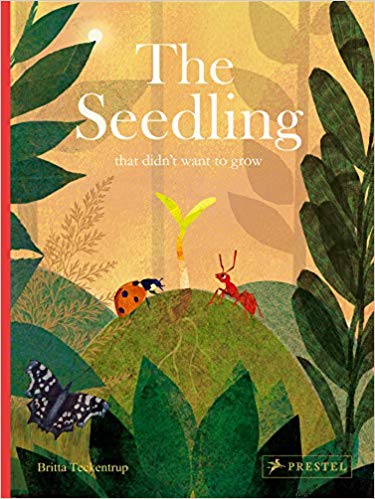 There once was a seed that took a long time to sprout, long after the other plants had grown up around it. Then it took some time to grow from a seedling into a plant. The creatures in the meadow noticed this special plant and monitored it. Ant and Ladybird sat next to it waiting for it to sprout. Circket guarded her roots and Mouse searched for clear paths. Finally, the plant reached the sunshine and left the meadow undergrowth behind. She grew up and up, wide and broad. She transformed with buds and then hundreds of flowers. All kinds of animals lived in her branches. When autumn came, she turned brown and withered along with the other plants, until one day all of her seeds took flight on the wind. Then winter came and spring arrived later, and that’s when everyone could see the transformation of the meadow.

Teckentrup’s picture book about a unique and different plant celebrates those who may be considered late bloomers and looks at how one individual can transform where they live. The seasonal aspect of the book is done beautifully, as the spring brings the sprouting of the seed, the summer with its amazing growth, and the quiet solemnity of autumn. All of this is captured in her illustrations which are rich and textured. The colors are far from simple, taking on the aspect of each season but also bringing in deep maroons in spring, gold light, and the oranges of autumn.

A quiet and lovely look at seasons, plants and transformation. Appropriate for ages 2-4.

Reviewed from copy provided by Prestel.