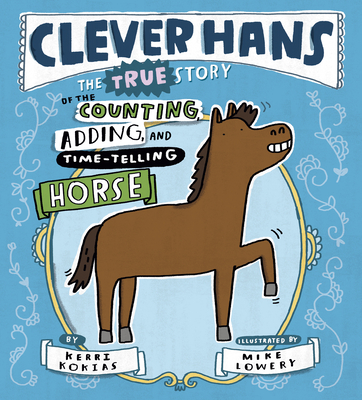 Clever Hans: The True Story of the Counting, Adding, and Time-Telling Horse by Kerri Kokias, illustrated by Mike Lowery (9780525514985)

In 1904 in Berlin, Germany, Wilhelm von Osten had an extraordinary horse named Clever Hans. Hans could count and tell time. He could identify colors and the value of coins. He could do math, read words, and knew music as well. Many people didn’t believe that Hans could really do these things and assumed it was nothing but a trick. Wilhelm von Osten truly believed in his horse though, having spent four years teaching him using treats to keep him focused. Scientists came to test Clever Hans and watch for secret signals from van Osten or others in the audience. Soon the tests started to figure out how Clever Hans was doing such amazing things! It wasn’t a trick, but instead showed exactly how smart he actually was.

Kokias invites readers deep into the mystery and wonder of Clever Hans. She sets up her book so that readers are presented with the amazing things that the horse can do and then bring them along on the journey of exploring what was actually happening. The book is gripping and fascinating as readers steadily see their own theories dismissed by the experts and the final reveal of the truth is satisfying and fascinating. The art by Lowery has a great playfulness to it that adds to the delight of the book.

A book of scientific discovery that readers must finish to discover how Clever Hans does it. Appropriate for ages 6-9.