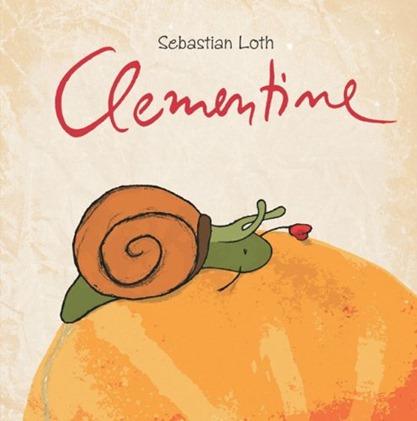 Clementine is a snail who loves anything and everything round.  She loves tires and balls, but most of all she loves the roundness of the moon.  So she decides that she is going to head to the moon.  Her best friend Paul, a worm, helps her come up with a plan on how she will get to the moon.  They try a trampoline first, with poor results.  The slingshot doesn’t do any better.  Then they decide to try a rocket!  And Clementine discovers that she has been connected all along to something amazingly round and magnificent.

The writing in this small picture book has a depth that is surprising and delightful.  Written in longer paragraphs than many picture books, the text remains completely readable and enjoyable for preschoolers.  It is because of the length of the text that the ideas can be explored fully.

Loth combines his poetic language with stunningly simple illustrations.  The illustrations play beautifully with light and dark as well as motion.  Opening with Clementine sitting near oranges, they also play with color and shape.

The result is a book that speaks straight to the dreamer in all of us.  Appropriate for ages 4-6.

Reviewed from copy received from NorthSouth. 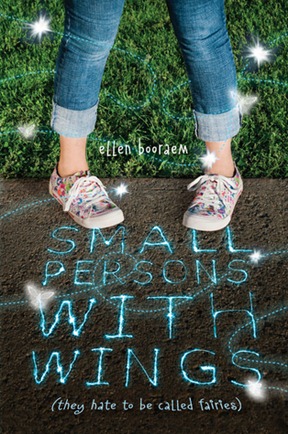 Mellie grew up with a fairy living in her bedroom.  He was her best friend for years.  But when she told her kindergarten class about him, he disappeared before she could prove he existed.  Now at age 13, she is still called “Fairy Fat” by her classmates.  Even her parents who had agreed that the fairy existed and treated him as real, declare in front of the school counselor that it is all Mellie’s imagination.  So Mellie decides to turn off her imagination and become practical.  When her parents inherit a decrepit inn in another town, it is Mellie’s chance to leave her nickname and the fairy behind for good.  But that’s before Mellie discovers that the inn is inhabited by lots and lots of fairies.

Booream’s writing is so very readable, inviting readers into a world where fairies are real and plenty of trouble.  The dialogue in the book works well, reading very naturally.  The setting of the old inn is nicely rendered, giving readers just enough detail to visualize the inn clearly, but not too much to get bogged down.

Booream excels at creating interesting characters.  Mellie is a wonderful young protagonist who displays an intriguing combination of prickliness, self-doubt and courage.  She is a girl who has been bullied for years, but has not been broken by it.  I also appreciate that Mellie is a heavier young lady who has heavier parents who love her and don’t mind her weight.  It is the other children who have issues with it.

The cover with its zinging blue, sparkly letters is very appealing.  I do wish that there was some even small hint off Mellie being a larger teen.  Plus I am getting very tired of the feet on covers as a way to not show problematic protagonists in great detail.

A very friendly and fun fairy fantasy, this book will be popular with fans of the Rainbow Fairy books who are aging out of that series.  Appropriate for ages 10-14.