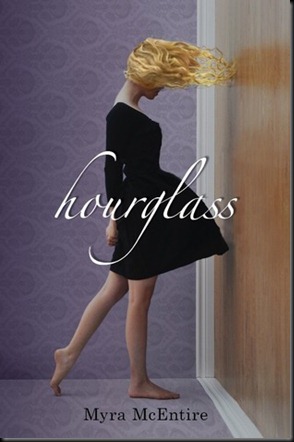 Emerson wants to be cured more than anything!  That way she can stop seeing the ghosts around her and start being normal.  The visions have plagued her since before her parents’ death but now they seem to be getting larger and one, who calls himself Jack, even talks directly to her.  So when her brother hires another consultant to try to cure her, Emerson agrees.  She didn’t expect to find a consultant who is not only completely hot, but who also understands her situation so completely.  As Emerson finds herself electrically drawn to the dark, mysterious Michael, she also wonders about the mysterious Hourglass organization he works for.  This mysterious, romantic and paranormal read mixes science fiction and fantasy into our modern world.

The cover on this book captured me immediately.  Happily, the gorgeous cover and its unusual feel work very well for the book.  The book has the same sort of modern but off-kilter beauty about it.  Though this is McIntire’s debut novel, it never feels that way.  She has created a book that has a maturity about it, especially in its world building and its characters.

Emerson is a very strong protagonist who is petite, powerful and gifted.  Her sarcasm elevates the book with its humor, keeping it modern and fresh.   Emerson is flawed too, very aware of her own fragility after her parents’ death, and never willing to share more than she has to with people.  Readers will relate to her effortlessly.

The world McEntire has created is our own but features people with unusual gifts.  While some of the gifts are only hinted at, others come only to full fruition when shared with others.  It creates a world of power but only when people work together.  In this way, it pushes Emerson personally to see if she will be willing to be that open.  The tension this creates is inherent to the success of the novel.

In a market filled with paranormal novels, this is one that you should definitely find time for.  It’s a gripping, mysterious read filled with plenty of romance.  Appropriate for ages 14-17.

Reviewed from copy received from Egmont.

Also reviewed by many other blogs.

The first is a trailer for Hugo, the Martin Scorsese film based on The Invention of Hugo Cabret by Brian Selznick.

The second is a trailer for Arrietty, a film by the amazing Japanese animation studio, Studio Ghibli, that did Totoro, Ponyo and many others.  It is based on The Borrowers by Mary Norton.