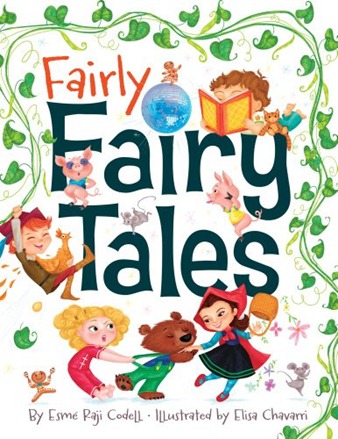 A child does not want to go to bed even after a kiss and some water.  So begins this quick and charming look at the elements of fairy tales.  Three elements of a classic story are given along with a fourth element that does not belong.  But then, maybe, it actually does!  Turn the page and that outside element has been combined with the story to create a wild mashup twist.  The stories include The Three Little Pigs with solar panels added, Little Red Riding Hood with shampoo, Jack and the Beanstalk with spaghetti, Cinderella with a disco ball, Hansel and Gretel with a piñata, and Goldilocks with a TV.  It’s a fun surprise for children familiar with the classic stories to see them mixed with the modern world.

Codell’s writing here is very simple, offering the elements of the stories and then the surprise.  Each real element is followed with a “yes” and the surprise element with a “nooooo” that then turns into a “well, maybe.”  This pattern is followed throughout the book which works well.  It leaves the emphasis of the book on the twist and the illustrations.

Chavarri’s illustrations were done digitally and have that smooth digital feel to them.  They are colorful and very funny.  The elements of the story are done on a white background but when the page is turned to combine them, the illustration fills the page with color and action.  It makes a nice visual contrast between old story and new.

If you are looking for a fractured fairy tale feel with fewer words and that is more accessible for younger children, this is a great pick.  Appropriate for ages 4-6, especially for those familiar with the stories.

Reviewed from copy received from Aladdin.