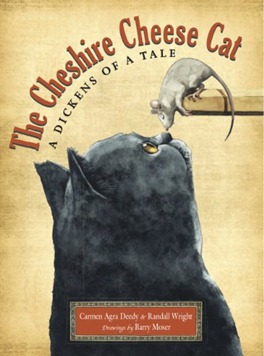 The Cheshire Cheese Cat: A Dickens of a Tale by Carmen Agra Deedy & Randall Wright, illustrated by Barry Moser

Skilley is an alley cat who is down on his luck, he has a broken tail, tattered ears, and has grown used to dodging brooms and wheels.  So when he hears that Ye Olde Cheshire Cheese, a local inn, needs a mouser, he concocts a plan to become that cat.  But Skilley has a horrible, shameful secret that he carries with him: he doesn’t eat mice.  Instead he prefers a good nibble of cheese.  Discovering this, a mouse named Pip strikes up a deal.  The mice of The Cheese will provide Skilley with the cheese he needs in exchange for him pretending to nab them and eat them.  The plan is perfection for a short time, until an evil cat named Pinch enters the inn and more secrets start coming out.  Add some historical British figures and you have an engaging romp of a novel for middle readers.

The authors have created a historical fiction novel that is also an animal novel.  It has figures like Charles Dickens and Thackeray, but mostly focuses on the animals themselves.  It is a novel that explores friendship and accepting yourself even if there are things that you might be ashamed of.  These messages are woven skillfully throughout the story and never become overbearing.

The pacing of the novel is also skillfully done.  There are quieter moments in the novel, but the foreshadowing makes even those uneasy ones.  Once the story really gets going, it reads quickly.  I couldn’t put it down in the last few chapters because I was so caught up in the story.

I’m not a huge animal story fan.  It seems that they tend to be tearful, overly emotive, and generally tragic.  That is not the case here.  Instead readers will cheer on the heroes, worry for their safety, and find themselves in the midst of a grand adventure in Elizabethan England.

Highly recommended, this book is one delicious read with a pleasing mix of sweet and savory.  Appropriate for ages 9-12.