The Quite Contrary Man: A True American Tale by Patricia Rusch Hyatt, illustrated by Kathryn Brown

In 19th-century New England when people lived and dressed plainly, Joseph Palmer most certainly did not.  It was his beard that made him different, since all the other men were clean shaven.  But Joseph did not just have a normal beard, his was huge, long and wide.  His neighbors were scandalized and tried to shame him into shaving, eventually trying to shave him by force.  His attackers headed to court before Joseph could get there and claimed that he had attacked them.  The judge fined him $10, but Joseph refused to pay it.  So he was jailed for a full year.  The rule in the jail was that prisoners had to be clean shaven, and you can guess how that went with Joseph.  As the tale twists and turns, readers will be in turns inspired by Joseph Palmer’s strength of conviction and appalled by the system that persecuted him.

Hyatt has found a true story that really speaks to what being an American means, down to the most basic rights of deciding how you appear.  While modern children may be shocked by the fact that beards were scandalous, this is a great book to start discussions about what sorts of things are taboo today that may also not make any sense.  Hyatt’s writing is engaging and rollicking.  The spirit of the book matches Palmer’s own strength and humor.

Brown’s illustrations are done in fine lines and soft colors.  They depict the glory of Palmer’s beard with enthusiasm.  On alternate pages, she creates a rustic frame from illustrations of branches tied together with vines, which adds to the feeling of the book being set in an earlier time.

An American hero, Joseph Palmer’s is an inspiring story of a regular man who stood up for his rights.  He would also make an intriguing hero to discuss in units.  Appropriate for ages 6-8. 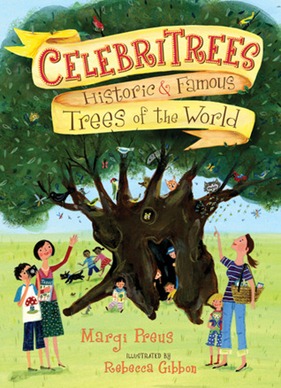 Celebritrees: Historic and Famous Trees of the World by Margi Preus, illustrated by Rebecca Gibbon

This book carries readers through the stories of fourteen “celebritrees” which have made a name for themselves.  Many of the tress are very old, some are special in different ways, and all are fascinating.  Here you will visit Methuselah, the oldest known single living organism on earth, and General Sherman, the biggest living inhabitant of earth, and Hyperion, the tallest tree in the world.  There are trees famous for events around them, trees that have objects stuck in them, and even a tree that owns itself.  This is an inviting book of trees that is a pleasure to spend time in.

Preus paints pictures of moments in history to help tell the amazing stories of these trees.  From the events they witnessed to the events they were at the heart of, the trees are much more than simply largest, oldest, and tallest.  Here they have stories that bring them fully to life.

Gibbon’s art has a simplicity that is almost that of folk art.  There is a richness to the color palette and a flatness to the perspective.  The trees are central to the art, as they should be, and the book celebrates them in browns and greens.

It is great fun to wander through this a veritable forest of famous trees.  Enjoy the journey, I certainly did!  Appropriate for ages 7-10.