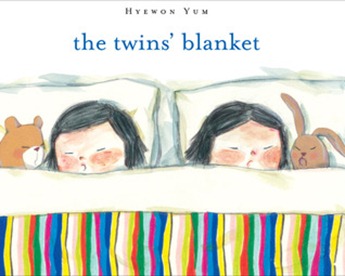 The Twins’ Blanket by Hyewon Yum

Two twin girls look just alike and share everything, especially a blanket that they have had ever since they were born.  But now the blanket has gotten too small for them to share.  Neither girl wants to give it to the other though.  Their mother tells them that they are going to be moving to big kid beds and that she will make each of them a new blanket.  They each pick out a fabric, one yellow with flowers, the other pink with birds and flowers.  They wash the fabric, dry it on the line, and then their mother sews the blankets.  When they are done, they have two new blankets that each have a piece of the original as well as their own personality.  Then they have to see what sleeping apart for the first time is like!

Yum has created a charming story about twins that shows the sibling relationship in all of its complexity, yet remains accessible for small children.  The girls both want to be alike and together, yet yearn to be different and apart at the same time.  Down to their stuffed animals that are alike but different, the story is really about their relationship rather than the blanket which is more of a symbol.

Yum’s illustrations are done in deep, rich colors and strong lines.  They have hints of color in unexpected places, creating an additional richness.  The girls while identical are always seen separately and uniquely in the art.

Charming and honest, this book about twins has a clever storyline and lovely illustrations.  Appropriate for ages 3-5.

All These Things I’ve Done by Gabrielle Zevin

This is the first book in a new dystopian science fiction series by the author of Elsewhere.  In the year 2083, the United States are in a darker time.  Coffee and chocolate are illegal, water is rationed, phone calls are very expensive, and paper books are antiques.  Anya Balanchine lives with her grandmother who is kept alive with machines, her older brother and her younger sister.  She is the daughter of New York’s most powerful mob boss, who unfortunately was killed years earlier right in front of Anya and her sister.  Her mother is dead too, murdered in her car which is how her older brother received his brain injury.  But Anya is determined to stay clear of her family’s connections and have a real life.  Yet everything comes back to chocolate, crime and family, and what Anya will have to do to protect the people she loves.

Zevin has created a book that takes place in a dystopian world.  While she gives lots of details about that world and about New York City as a decaying giant, the focus is on Anya, her family and her friends.   The book has such focus and is so well written, readers won’t miss the larger world being explained.  Instead this is about an insular world inside of a dystopian setting.  The focus is powerful, creating a gripping reading experience.

In Anya, Zevin has created a protagonist who is razor sharp, very tough, yet melts like chocolate too.  The romance in this book is beautifully built.  It reads as real, poignant, and star-crossed.  Anya is a young woman carrying far more than her share of the weight of the world.  This first book in a series reads as a complete and satisfying story, yet as a reader I was thrilled to see it was only the beginning.

Get this into the hands of fans of Holly Black’s White Cat.  The combination of mob and dystopian make this a thriller that is sure to surprise and delight.  Appropriate for ages 15-17.