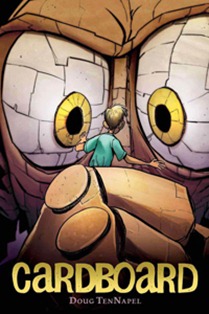 What’s the worst birthday present ever?  It just might be the cardboard box that Cam’s father had to give him.  Cam’s dad can’t find work, his mother is dead, and his family is falling apart.  But Cam is still optimistic about the fun the two of them can have together building things from cardboard.  Little does he know that the cardboard things they create are about to come to life!  There are rules that come with the magical cardboard.  Gather all of the scraps that are unused and return them to the man who gave Cam’s dad the cardboard.  Unfortunately, the local bully finds out that Cam has something worth taking away and starts to create an army of cardboard monsters.  What will it take for Cam and his dad to fix the misuse of magical cardboard?

TenNapel’s graphic novel is pure maniacal genius.  He takes a universal thing like playing with cardboard and makes it first pure magic and then dark and sinister.  He also carries the story to the extreme, refusing to back away and take an easier approach.  It makes for a riveting graphic novel that will have plenty of kid-appeal.  My only quibble is that the side story of the father’s romantic interest in the neighbor lady does not add to the story.

Because I am reviewing an advanced copy of the book, I don’t have it in the full color throughout.  The pages I do have are a mix of sandy tan, zips of red, deep purples with plenty of shadows in black.  He plays with angles and points of view, creating an entire world of cardboard before he is finished.

This is a darker comic for kids, something that children will appreciate and gobble up.  Appropriate for ages 9-12.

Reviewed from ARC received from Scholastic.

One thought on “Review: Cardboard by Doug TenNapel”