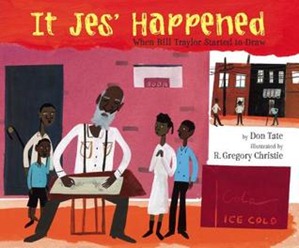 This picture book is a beautiful tribute to a legendary folk artist.  Bill Traylor grew up a slave in Alabama.  Born in 1854, he worked in the fields as a child.  When the slaves were freed at the end of the Civil War, his family stayed on working as sharecroppers on the same land they worked as slaves.  As things happened to him throughout his life, from hunger to parties, Bill Traylor remembered it all.  When he finally left the farm and headed to the big city of Montgomery, it was those memories that he drew and painted.  At age 85, he started drawing and kept on.  He got attention for it too, eventually getting a gallery show in 1940.  Bill Traylor showed his life and his heart through his simple yet powerful art.

Tate does not shy away from truly embracing Traylor in this picture book.  The book has more words than many picture books, but they are necessary to truly recreate both the memories of Bill Traylor and the amazing transformation to artist that happened so late in his life.  The writing is solid and smooth, building a full life before your eyes.

Christie’s art hearkens back to that of Traylor’s in its rough simplicity.  It speaks to the deep colors and the power of plain paint and strong lines.  There is also a wonderful dynamic quality to the art that offers motion and storytelling.

A lovely look at the life of a folk artist, this book is a great example of a picture book biography.  Appropriate for ages 6-9. 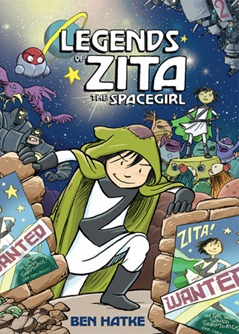 Legends of Zita the Spacegirl by Ben Hatke

This is the sequel to the wonderful graphic novel, Zita the Spacegirl.  In this second book, Zita is having to deal with her fame seriously cramping her style.  She can’t go anywhere without security (in the form of the friends she made in the first book.)  So when an opportunity arises, Zita heads away with Mouse for a little time alone.  Little does Zita know, but a discontinued robot who can make herself look like another person, has disguised herself as Zita.  By the time Zita realizes what has happened, Piper and the others have left with her to try to save a planet.  Now Zita has to follow them and steals a spaceship to catch up.  Unfortunately, this makes her a criminal and the Doom Squad are after her.  This is just the beginning of another amazing adventure of Zita the Spacegirl.

Dealing with the negative side of her fame is a wonderful way to open this second book. Add to it the strange robot who can imitate people, the ferocious Doom Squad, and several new friends she makes along the way, and you have another Zita book that is impossible to put down.  Zita is a great protagonist, a fantastic mix of normal girl and heroine.  She has real adventures in space as a young girl, something you don’t often see in children’s graphic novels.  She also solves many of her own problems, not relying on others to save her.

Hatke’s art is clean and clear and filled with color.  He manages to create characters who project their personalities just through a few facial expressions and their appearance.  His pacing is spot on, carrying the book forward as fast as you can turn the pages.

This series belongs in every public library, offering a great young heroine in graphic novel form.  Appropriate for ages 7-10.