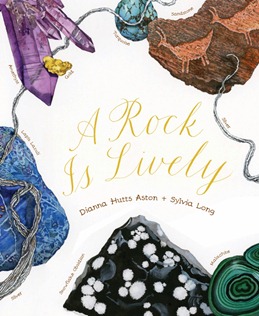 A Rock Is Lively by Dianna Hutts Aston, illustrated by Sylvia Long

Another stellar collaboration by the team that created An Egg Is Quiet, A Seed Is Sleepy, and A Butterfly Is Patient, this nonfiction picture book focuses on rocks and minerals.  The book begins with rock melted as magma beneath the earth.  It talks about what makes up rocks and how old they are, as well as the rocks that we find in space.  Rocks as tools and weapons are explored, mixed in with the amazing rock interiors that surprise and delight. The different types of rocks finish off the factual piece of the book, but the bright and beautiful illustrations continue all the way to the final lapis lazuli endpages.

Aston manages to write nonfiction as if each sentence is filled with delight.  Her enthusiasm for the subjects she writes about is evident in her writing, inviting young readers to get just as interested as she is.  The art carries that same enthusiasm in its bright colors and details.  Done in watercolor, the colors are surprisingly deep and lush.

If you have the first three books from these amazing collaborators, this is a must-buy.  It should be on the shelves of any school or public library, sure to get young people exploring a new subject.  Appropriate for ages 7-9. 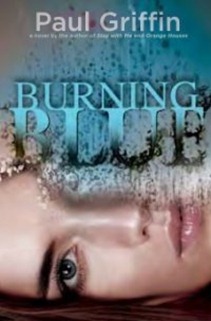 Nicole was a beautiful girl, the prettiest in the school.  But that all changed when someone threw acid in her face at school.  Nicole didn’t know who did it, because she didn’t see anything other than the bottle aimed at her face.  Her boyfriend was nearby, the janitor seemed to know not to touch her, and a teacher was around too.  Quiet loner, Jay decides to figure out who did this.  He sees beyond her wounds, realizing that there is a lot more to Nicole than her lost beauty.  Jay is a hacker, able to get into government databases and trace people’s activities online.  As he gets closer to the truth of the attack, he and Nicole grow closer too.  Now he has everything to lose, especially as Nicole seems to be a suspect herself.

Griffin nicely creates a lot of tension and mystery in this story of disfigurement and beauty.  Told from Jay’s point of view with insets from Nicole’s journal, this novel asks difficult questions about beauty, what lies beneath it, and the envy that it produces.  The question of who attacked Nicole stays in Jay’s focus, but the reader will equally enjoy the growing relationship between Jay and Nicole.

Jay is a fascinating character.  He is a hacker who pretends to know nothing about computers.  Some of his online conquests seem a bit to simple and easy, but with that aside, the hacking forms an intriguing basis for a detective to work from.  He is able to make breakthroughs and discover information that otherwise would be impossible.  But beyond the actual hacking, Jay lives a tattered life with his father after his losing his mother, and struggles with epileptic seizures.  His is a life lived alone by choice, until Nicole enters it.

A strong introverted and geeky character at its heart, this novel is a fine mystery but much more too.  Appropriate for ages 13-16.