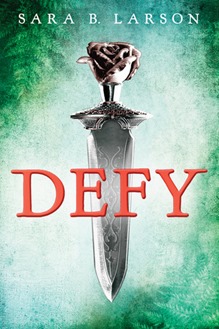 Defy by Sara B. Larson

This debut YA novel is a mix of romance and fantasy.  In a jungle kingdom with a cruel ruler, Alexa and her twin brother survive the murder of their parents.  Alexa has been raised by her father to fight, something very unusual for a girl in their society.  This lets her disguise herself as a boy and avoid being taken to a rape house and used by the king’s soldiers.  She becomes one of the best fighters in the prince’s guard.  But the prince is aloof and cold to everyone, never showing any interest in becoming a ruler.  Alexa finds herself guarding the prince personally after an attempt on his life.  Then she is taken hostage along with the prince and another of his guard.  She finds herself drawn to the man the prince is behind his cold exterior and also drawn to the other guard, a man she has known for years.  But how will they ever accept her as a girl when they have only known her as a man?

Larson has created a very compelling world here.  The jungle setting is refreshing as is the kingdom ruled by fear and cruelty.  The pacing is fast, almost breakneck, making it a very riveting read.  Larson’s characters are complex as well.  In particular, the prince himself is very well drawn as a mysterious figure that is constantly revealing new aspects.  The ending is satisfying with a build up that adds to the tension.

At the same time, the book does suffer from some debut mistakes.  Alexa is constantly losing consciousness throughout the book.  She is tough as nails, except for her skull.  Then she seems to recover from long blackout periods with few ill effects.  The rape house aspect of the kingdom was not necessary for the story at all.  I hope that it becomes vital in the rest of the series, because otherwise it was a poor choice to be included.  When Alexa’s real sex is revealed, it is very anticlimactic.  For something that was seen to be life or death, the result is lukewarm at best.

While it does suffer from some plot issues, readers who enjoy fantasy mixed with romance will enjoy this new series.  Appropriate for ages 14-16.

Reviewed from digital galley received from NetGalley and Scholastic.