Set in Australia, this teen novel features the first person voices of two sixteen-year-old girls experiencing a semester in a school wilderness camp.  Sib has been in this school for a long time, so it surprises everyone, including herself, when she is selected as a model for a billboard and modeling campaign.  Suddenly instead of ignoring her, everyone is paying attention to her.  That includes Ben Capaldi, the cutest and most popular boy in school.  Sib has no idea how to deal with this new interest, but her best friend is very willing to guide her, perhaps too willing.  Lou is a new girl in school and is recovering from the loss of her boyfriend in an accident a year ago.  She has no interest in joining into school life or making new friends.  Instead she wants to be left alone, connect with her old friends, grieve and try to figure a way out of her extra counseling sessions.  But even as she walls herself away from the others at school, she finds herself getting drawn into the drama and life happening around her.  This story of two very different and equally compelling young women dives deep into romance, sexuality and friendship.

Wood has made recent news through her frank depiction of teen female sexuality.  This book stands out clearly with its positive but also nuanced and honest look at one girl’s first sexual experience.  With moments of humor throughout, the sex is shown with lots of heat, tons of desire, and then reality as well.  In the end, the character decides what is right for her, not what is right for all teens, but there is no shaming, no despair, no regret, just decisions going forward.  This is sex as teen girls experience it, done with intelligence and care.

The reason the sex in the book works so well is that Wood has created two main characters who are themselves intelligent, caring and fascinating.  Sib is dealing with suddenly breaking the role that she had been cast in, and being thrust into popularity for something that she sees no value in, modeling.  It’s a deft combination of feminism and pop culture.  She also has a manipulative best friend, a character who is beautifully drawn and one that readers will adore to dislike.  Lou too is a complex character with her grief but also her growing interest in those around her.  Her internal voice is wonderfully wry and funny, showing a spirit and intensity well before she reveals it to the world around her.

Set in a clever parent-free wilderness setting, this book is smart, funny and just what fans of Rainbow Rowell are looking for.  Appropriate for ages 14-18. 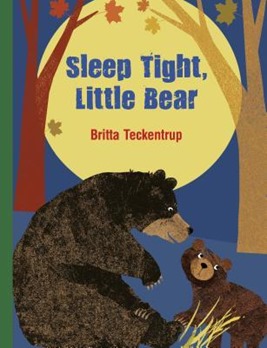 Winter is coming and Little Bear and Mommy Bear have been getting their den ready for the cold weather.  Soon it will be time for them to hibernate for the winter and wake up again when the warmth of spring comes.  Little Bear is excited about hibernating, but before he and his mother go to sleep, he has to say goodbye to all of his friends.  Little Bear goes to each animal, wishing them a good winter and they all wish him a good sleep and promising to watch over him as he rests.  As they return to their den, the snow is starting to fall and the winds are blowing cold.  Inside their den, it is warm and cozy and Little Bear is fast asleep before he can even finish saying goodnight to his mother.

First published in Germany, Teckentrup’s picture book celebrates community and diversity without ever using those words on the page.  It is clear throughout the entire book that the bear family is beloved in the woods.  While some of the animals, like Owl, are not so friendly, the others are warmly affectionate to Little Bear.  Many of the animals speak about watching over and taking care of the bears as they hibernate.  They also speak about how different the bears are from them and sometimes briefly say what they will do in the winter.  The messages are subtle and woven into this story about animals.

The illustrations are a strong mix of textured trees and animals and more simple elements that allow the textures to stand out on the page.  One of the first pages in the book shows the entire forest as well as the animals that the bears will be visiting before they hibernate.  It’s almost a map to the story and offer a peek into what will come.

A book about a friendly community of animals, this picture book is perfect for reading on chilly autumn evenings and ideal for a bedtime read.  It will also be a welcome addition to seasonal story times and units on hibernation.  Appropriate for ages 3-5.

Reviewed from e-galley received from NorthSouth and NetGalley. 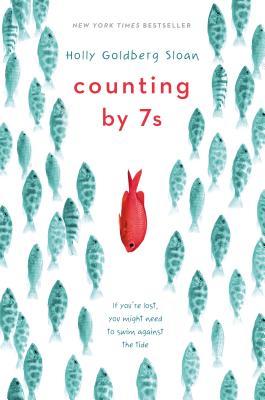 Entertainment Weekly has the news that a star has been found for the film based on Holly Goldberg Sloan’s novel Counting By 7s.

Quvenzhané Wallis, who was nominated for an Oscar for her role in Beasts of the Southern Wild, will be playing the lead.

Thanks to EarlyWord for the link.