I’ll Give You the Sun by Jandy Nelson

Jude and Noah are twins and they are so close.  Both of them are artists and Noah in particular sees the world as constant inspiration for his artwork.  Noah is withdrawn from others his age and bullied by other boys.  Jude though is being noticed by the same boys who bully her brother and as they turn thirteen, the two of them may be different but they are still close.  Jude is wearing lipstick and diving from cliffs.  Noah is starting to fall for the boy across the street.  Three years later though, the two of them are completely estranged from one another.  They barely speak.  Jude is the artist now and Noah no longer paints.  Jude has discovered a mentor for her art and a boy who is just as damaged as she is.  Noah is a normal straight teen who hangs out with those who once bullied him and now dives from cliffs himself.  How did two teens change so much in such a short period of time?  That’s the story here, and it involves grief, loss, betrayal, lies, love and truth.

Nelson tells the early part of the twins’ story in Noah’s voice.  We get to experience the joy he feels about art and the beauty of his emerging sexuality combined with his fear of being discovered.  Jude tells the story after their relationship is fractured.  Her story is one of passions and change.  They are both stories of trying to hide what you are, trying to become something new.  They are stories that veer swiftly, change often and shout with emotion and pain.

Nelson writes with exquisite emotion on the page.  She shows the passion, the fear, the grief, the love vividly and with such heart.  It is her emotional honesty on the page that avoids sentimentality at all.  Rather this book is raw and aching in every way, from the new relationships that are filled with lust and longing to the destroyed sibling relationship that is one lost and hurt betrayal after another.  She also manages to somehow capture art and inspiration on the page, the power of art to express, the emotions that it creates and acknowledges, the joy of creation and the agony of being unable to make it.

Powerful storytelling that is beautifully written and tells the story of two siblings and their journey through being teenagers.  Appropriate for ages 14-18.

Reviewed from copy received from Dial. 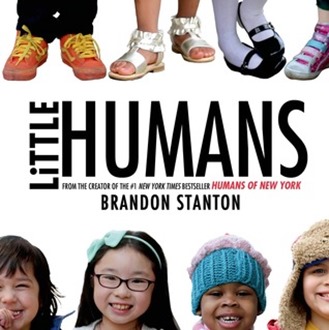 The photographer behind Humans of New York brings his talent to a children’s book.  Using photographs taken on the streets of New York, this book speaks to the power of children.  Children may fall down, but they get back up, because they are tough.  But they still need love and friends.  Children are helpful, playful and talented.  They learn and grow.  They also know how to ask for help when they need it.  And they do so very much so well that they just might insist they are are not little after all, they are big!

On each and every page, Stanton celebrates urban culture and diversity.  There are children of every color here, each with their own unique sense of style and and distinct personality that pops on the page.  His photographs speak volumes beyond the text that does little more than support the gorgeous, hip photographs.

A dynamic and diverse book that can be enjoyed by the smallest of children.  Appropriate for ages 2-4.