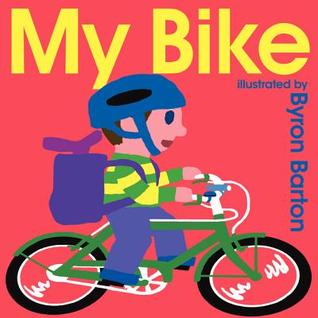 My Bike by Byron Barton (InfoSoup)

Tom rides his bicycle to work each day. On the way, he passes all sorts of other vehicles like cars, buses, and trucks. As he gets closer to work, he passes lots of people. Then he passes monkeys, acrobats, tigers, lions and elephants! Once he reaches the tent where he works, he changes into his costume and puts on his makeup. He heads into the circus ring as a clown, ready to do his act. Once he’s up on the tightrope, he hops aboard another mode of transportation, a unicycle.

This jolly picture book will appeal to fans of transportation books and circuses alike. Barton has written other classic titles in this series like My Car and My Bus. The book reviews the various parts of a bicycle and then through very simple sentences and words eventually reveals Tom’s job to the readers. The book is straight forward but cleverly done so that readers will wonder what his job is all along his route to work. The final panel of him riding off in his regular clothes and a clown nose is a great farewell.

Just as with the text, the illustrations are simple too. Done in Photoshop, the art is clean and bold, the colors bright and cheery. The transformation into a clown in handled well and Tom never turns creepy on the reader, instead keeping his friendly demeanor and appearance throughout. The final panel of him riding off in his regular clothes and a clown nose is a great farewell.

The simplicity of both the text and the illustrations make this a great pick for smaller children. Appropriate for ages 2-4.