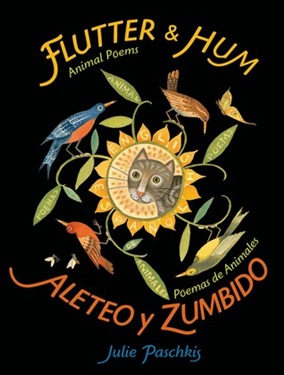 In short poems in both Spanish and English, animals are explored in the way that they move and live in their habitats. The book begins with a slithering snake poem that hisses on the page. Other poems include black crows hopping and cawing, the slow movement of a black cow in a golden field, fleeting glimpses of a deer, and the shine of an owl at night. Still other poems focus on domestic pets like dogs and cats who fill the page with their personalities captured in verse on the page.

I was surprised to read in the Author’s Note at the end of the book that Paschkis is not a native Spanish speaker nor a poet. It was Spanish that allowed her to find her poetic voice, which is just as special as her art. She effectively uses her verse in both languages to convey the essence of the animal, celebrating what makes them unique. The poems are stand alone and strong, easily adapted to the classroom for specific units and subjects.

As always, Paschkis’ illustrations are gorgeous. They have a folkart flair about them and have words in both Spanish and English woven into them that let the words become part of the art in a very concrete way. It also gives these bilingual poems a new way to convey the dance of the two languages next to one another.

A dazzling collection of poems, it is welcome both for its bilingual elements and the alluring combination of words and art. Appropriate for ages 6-9.