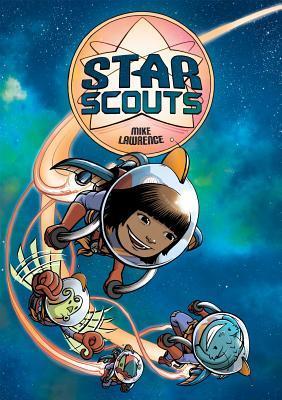 Avani’s father has signed her up for Flower Scouts so that she can make friends in her new town. But all of the other girls are interested only in talking about makeup and boys. Then Avani is accidentally teleported into space by an alien named Mabel, who is working on her own badges for her scout troop. Being a Star Scout like Mabel is a whole lot more interesting than being a Flower Scout, so Avani starts joining them instead of her earth-bound scouts. As Avani learns to build robots, teleport things, drive space ships, and race jetpacks, she finds a place where she fits in. Now she just needs to get her father to sign off on a permission slip for her to go to Camp Andromeda for a week!

This friendly science fiction graphic novel is filled with humor and lots of action. Avani is a main character of color with her Indian heritage that plays a role throughout the graphic novel in things like language and food. She is game for the entire adventure, allowing herself to try new things, push herself to learn and even form a real rivalry with another troop of scouts.

The art is playful and fun with the dialogue working well to move the book forward at a fast pace that will please young readers. There is lots of action, plenty of space exploration and even camp pranks and jokes. The pleasure is in seeing camping tropes used on an asteroid by alien creatures.

Funny and warm, this graphic novel has strong STEM overtones and even a few poop jokes. Appropriate for ages 8-12.