In his classroom, Henry is looking to make a new friend. It can’t be the class pet, because Gilly the fish can’t play on the swings. It can’t be his teacher. As Henry considers different children in his class, he realizes that some of them are too colorful even when you try to do something nice for them. Others don’t listen very well, like a friend would. Other kids break the rules or play with worms. Henry found himself watching Gilly in her fishbowl. Katie is watching Gilly too. Henry thinks about Katie. The two play blocks together quietly and Katie listens to Henry and he listens to her. They play together but each in their own way. It’s just right.

Bailey has written a captivating story about a boy with particular needs and wants in a friend. Henry has strong opinions about friends, ones that make him angry when they are dismissed. When Henry gets too frustrated he ends up in a bit of trouble at school. It is great to see a book embrace the deep emotions of children and not label any of them as wrong. Henry doesn’t have to change at all to find a friend, he just needs some patience.

Song’s illustrations are simple and warm. They depict a diverse classroom of children, all possible friends for Henry to consider. Done in ink and watercolor, they show everyone’s emotions throughout the day very clearly through body language and facial expressions.

A lovely look at the emotions of finding a friend. Appropriate for ages 3-5. 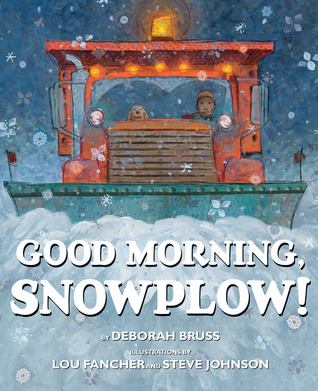 When the snow starts to fall, a snowplow driver and his dog head out into the night to clear the roads. They do safety checks and get the hopper filled with salt and sand. Then they are off into the dark to clear the snow from the roads. Giant drifts are formed as they plow past while branches grow heavy with snow. When a car goes by too fast and ends up in the ditch, the plow calls dispatch for a tow for them. At the railroad tracks, the plow driver also stops, stepping out of the cab of his truck into into the hush of the night. The train goes by, creating a cloud of white. The driver heads home just as others start to wake and falls asleep in bed as the sun rises.

Bruss captures the quiet beauty of a snowstorm as she tells about the night work of clearing the roads. She writes with a poetic touch, creating dramatic moments in the story like the train going past and the car skidding into the ditch, but also embracing the silent work of the plow and the hush of the storm.

The illustrations are wonderful, offering looks at the big truck that will appeal to youngsters who love heavy machinery but also beautifully capturing the storm. One double-spread in particular has just the right light as the truck goes through town. Anyone living in a northern state will recognize that light and the quiet moment before the plow comes through.

Ideal for winter reading, curl up with this one before being plowed out yourself. Appropriate for ages 3-5.

Reviewed from copy provided by Scholastic.