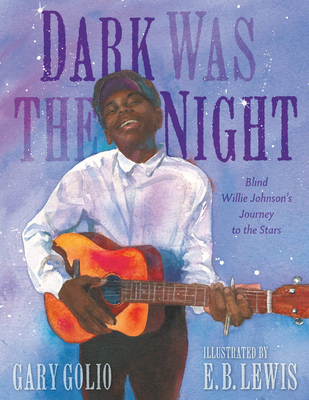 This nonfiction picture book is about the life and music career of Blind Willie Johnson. The book begins with the fact that Willie Johnson’s music was sent into space on Voyager I in 1977. The year then turns to Johnson’s birth in 1897. Johnson was a musician from a young age when he could still see, losing his sight around age eight. Music continued for him in church choir and changing gospel songs to the blues. Grown up, Johnson traveled Texas by train, performing on the street corner and in churches. Eventually, a man from a record label heard him and his first record sold thousands of copies. Time passed and one of those songs launched into the darkness of space.

Golio keeps his text tight and brief, giving young readers plenty of opportunity to witness the remarkable gift of music that took a man from being a blind child to making a record that made history. Written in the second person speaking directly to Johnson, the book has the feel of a gift laid before him as well as being a reminder to young people of what hard work and skill can create in your life.

Lewis’ illustrations are remarkable. Done in watercolor they are filled with light, yellows glowing, stars shining, and hope emerging on each page. There are several great images of Johnson in the book, playing is guitar in each.

Make sure to listen to “Dark Was the Night” while reading this with children. Appropriate for ages 4-6.