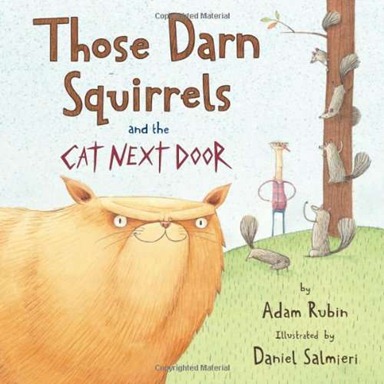 Those Darn Squirrels and the Cat Next Door by Adam Rubin, illustrated by Daniel Salmieri

This sequel to Those Darn Squirrels continues the story of the squirrels and Old Man Fookwire.  Old Man Fookwire has been waiting for spring when his beloved birds would return.  The winter has been long with only the squirrels for company (and trouble).  After a pleasant spring morning spent painting birds, Fookwire is shocked to hear kabooms coming from the house next door.  Little Old Lady Hu was moving in along with her evil cat, Muffins.  She had moved to the country so that Muffins could make some new friends, but Muffins was not a friendly cat at all, as the squirrels were about to find out.  This time the squirrels craftiness just might help out Old Man Fookwire too!

Rubin plays with words to great effect here.  Not only with the names of Fookwire and Little Old Lady Hu, but with the birds’ names: baba birds, yaba birds and the floogle bird too.  Throughout the book, the language is silly and rich, making for a great read aloud.  Rubin also has a great feel for pacing, allowing the humor really stand strong and the story to roll along merrily.  There is plenty of humor here, including the attacks of Muffins being wedgies, noogies and wet willies.

Salmieri joins in the humor with his illustrations as well.  The fine-lined illustrations have a natural silliness to them.  Old Man Fookwire has a great red nose, huge glasses, and a body that manages to be skinny and paunchy at once.  The squirrels look crafty, bright and foolish all at once.

If you haven’t read the first book, you should, but you will be able to enjoy the second all on its own.  Get this into the hands of any kids who enjoy a brains vs. brawns match where the brains win, but you get to giggle at wedgies along the way.  Appropriate for ages 4-7. 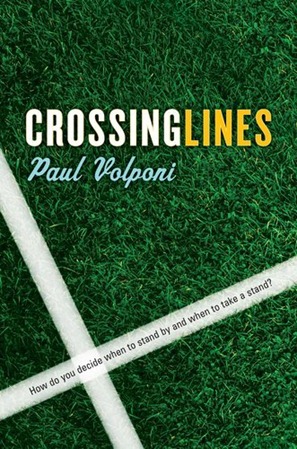 Adonis plays on his high school football team and all of his best friends are football jocks.  He has just started dating Melody, one of the hottest girls at school.  Alan is the new person at school.  He is the only boy in the Fashion Club and a kid who refuses to conform.  Alan is openly mocked and ridiculed by Adonis’ friends.  Things take a turn for the worse when Alan begins openly wearing lipstick and dresses at school.  He even embraces the name the jocks have been calling him, Alana.  Adonis finds himself pressured by Melody and his younger sister to befriend Alan while all of his friends at school assume that Adonis detests Alan just as much as they do.  Adonis is trapped in the middle, never telling anyone exactly how he feels and where he stands.  But then a plan to bully Alan goes wrong and Adonis is forced to choose sides.

I have mixed feelings about this novel.  Part of me wishes that the subject matter had been handled more subtly.  At the same time, I understand the value in a very accessible book that teens who may feel mixed feelings about GLBTQ issues can relate to.  Volponi writes in a very concrete way here.  His prose is tight and very reality based.

Adonis is a character who will also be easily understood.  His own homophobic-at-worst and mixed-at-best attitudes are clear.  Readers will see themselves in him because we all hesitate at times to speak up, go against our peers, and side with the loner or different.  And here is where I wish that the book had been written with more internal dialogue and less concrete depictions.  Adonis does not ever reflect on why he is homophobic, why he reacts to Alan in the way he does, why he doesn’t leap to defend.  Instead the book stays above those questions, which does not add to its depth.

This lack of self-exploration also hurts the character development of the secondary characters in particular.  Alan is a very interesting character who offers glimpses of his strength but never really comes alive for the reader.  Unfortunately, he never becomes more than a stereotype.

Volponi has again written a book that teens will relate to easily.  It is a book that asks for discussion, one that will have teens questioning what their reaction would have been in the same situation.   Appropriate for ages 14-17.

Reviewed from ARC received from author.