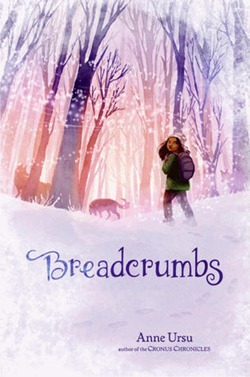 Hazel and Jack have been best friends for almost their entire lives.   They share a love of Harry Potter, Narnia, and comics.  But now Jack spends a lot of time with his friends who are also boys.  He still does special things with Hazel, but it seems like less and less.  Then one day, something horrible happened and Jack stopped being friends with Hazel.  He was rude and mean.  Soon after that, Jack disappeared.  His parents weren’t worried.  They insisted he had been sent to care for an elderly aunt, but Hazel felt that something was really wrong.  When Tyler, a boy Jack was friends with, told her that he had seen a strange woman take Jack into the woods, Hazel set out to find Jack and bring him back.  But even her love of books can’t prepare Hazel for the twisted world she finds in the woods and the hazards she will have to face to find her best friend.

Ursu writes with a tone of wonder and discovery.  She puts things in ways that they have not been said before, creating new ways of expressing emotion and attachment.  She takes her time, building a way of seeing the world that is quirky and compelling at the same time.  Here is a paragraph from page 44 which shows the care with which she has created her world:

There were some days, ever since the summer, when the whole feel of Jack seemed to change.  Like suddenly, instead of being made of baseball and castles and superheroes and Jack-ness, he was made of something scratchy and thick.  Hazel could tell, because he had been her best friend for four years, and you can tell when your best friend is suddenly made of something else.  And all she could do was try to remind him what he was really made of.

The two main characters are exceptional.  Jack is a boy dealing with a mother fighting severe depression, someone who has already been lost to the emptiness and cold.  Hazel is a girl who never sees her father any more, who has a mother who wants her to make new friends beyond Jack, and who loves her friend beyond bravery.

Everything in this book just works.  The background of the two protagonists clicks into what they do in reaction to the magic that enters their world.  Jack embraces the cold and emptiness.  Hazel has been abandoned by her father and will not abandon her best friend.  It is all simply cohesive.

This is a magical, amazing, lovely read that will appeal most to readers who also love Narnia and The Snow Queen.  Appropriate for ages 9-12.