Here are some newly released Halloween books that are sure to mix shivers and giggles: 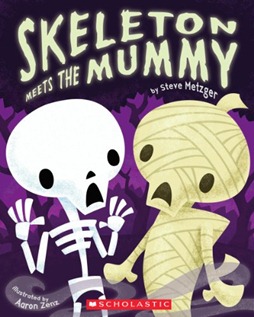 Sammy is looking forward to trick-or-treating with his best friend on Halloween night.  His mother catches him before he can leave and asks him to run some soup to his grandmother.  To get there, he has to head through the woods.  He gets scared along the way by a bat, the wind, and even a tree that looks like a monster.  So he’s already jumpy when he hears the footsteps behind him and sees the mummy chasing him!

Told in straight-forward prose, the illustrations are a large part of the appeal here.  They are crisp, clean and vivid.  The characters glow against the dark Halloween backgrounds.  This is a story with a funny twist, plenty of appeal and even a couple of bumps in the dark. 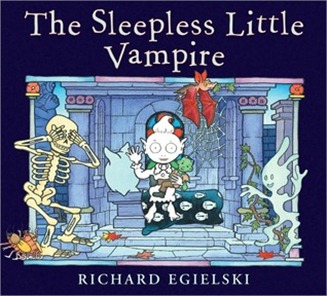 Little Vampire can’t figure out why he is having trouble falling asleep.  It could be the spitting spider.  It could be the flitting bats.  Maybe the cockroaches crawling on the floor?  Or the werewolf howling?  More and more Halloween characters enter the story and create their own noises:  a witch, skeletons, ghosts.  But none of them are the reason he can’t sleep.  Nope, it was just that he was trying too sleep too early.  It wasn’t morning yet!

Egielski bridges the pages brilliantly, moving from one possible cause of being unable to sleep to another.  The final reason will surprise most readers, though as they see the sky lighten they will be able to guess the ending on the final page.  The illustrations get increasingly busy as more characters enter.  The detail makes this a better pick to use one-on-one or with a small group of children. 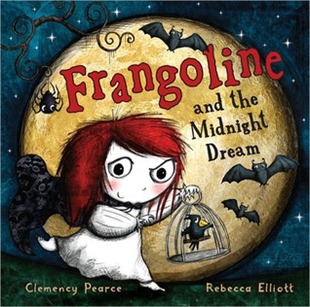 Frangoline and the Midnight Dream by Clemency Pearce, illustrated by Rebecca Elliott

Frangoline was a perfect child, neat and clean.  Until the deep of night, when she put on her black cape and escaped the house.  The moon tried to warn her about being in bed, but Frangoline replied, “I’ll do exactly as I please!  I’m Frangoline!”  She climbed down the tree outside her window, ran across the lawn, blew raspberries.  She woke the forest animals but then yelled so loud that she scared them all away rather than them ever scaring her.  She danced and pranced in the graveyard and woke up the ghouls.  When they chased her up the church steeple, she finally got worried.  But where can she go if she’s cornered up there?

There is a wild delight in this book and in the naughtiness of a little girl having such fun alone in the middle of the night.  The moon plays a big role in the book, warning her of the dangers but also being a sort of parental figure on each page.  The story is silly, clever and has the dark night creepiness along with the ghouls.  But nothing is drawn in a particularly scary way, instead it stays inviting with a strong sense of fun.

All three books are appropriate for ages 4-6.

All were provided for review by Scholastic.