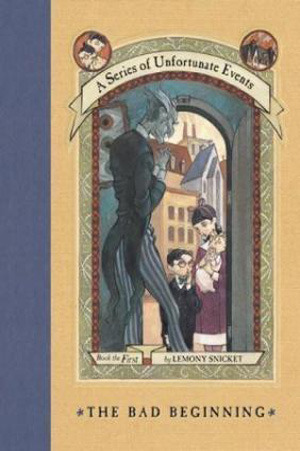 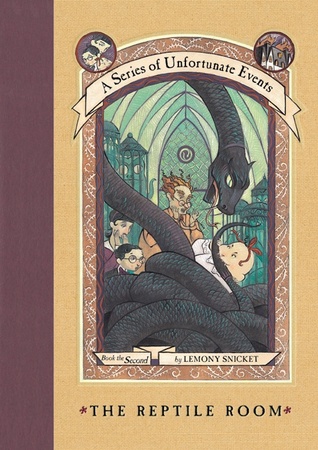 Netflix has announced that it will be producing a series based on Lemony Snicket’s very popular “A Series of Unfortunate Events.”  This new series is not expected to star Jim Carrey like the 2004 film did.

No expected release date has been set.

My Grandfather’s Coat by Jim Aylesworth, illustrated by Barbara McClintock

Based on a Yiddish folksong, this picture book celebrates the thrift, hard work and skills of immigrants to the United States.  Told in the first person by the grandchild, this book looks at one man who came to the US and worked hard as a tailor.  He met a woman and they got married and he made his own coat for the wedding.  He wore it everywhere until finally, it was worn it.  So then what did he do?  He made it into a jacket.  He wore that everywhere and eventually wore it out too.  So then he made it into a vest.  He then wore that until it was frayed.  The book progresses through a necktie and finally a stuffed mouse made from the last of the old fabric and even when that is eventually torn apart, a mouse finds it to be perfect for her nest.

Aylesworth uses a repeating structure throughout this book, first introducing his character of the grandfather and then having him make a garment, wear it out, make another, and start the cycle again.  He uses just the right amount of rhythm and rhyme to hold the story together, making the repetition clear and rollicking.  It reads like a folk tale, filled with a celebration of one man and his skills at reusing things.

McClintock’s illustrations suit this subject matter perfectly.  Her artwork’s vintage feel is right at home here, creating repeating tableaus on the page that reflect the changing time as children grow up and also the process and time of recreating garments from the scraps.  Her art shows the loving family, the shrinking deep blue fabric, and the passage of time.

This story of reuse and recycling takes that modern movement and translates it directly into the frugality of our American ancestors.  Cleverly written, striking illustrated and a great read aloud, this book is appropriate for ages 4-6. 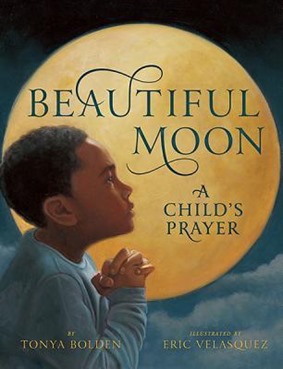 Bolden manages to keep this book solely about prayer and the act of praying for others without defining what religion the boy is.  Her use of the moon as a unifying factor works well, creating a book that flows along in a natural way.  Bolden’s text is done in poetic form, capturing moments of people in need of prayers with a real clarity.

Velasquez’s art is luminous.  He captures moonlit rooms and places with a cool but also rich light.  He celebrates diversity on the page, the people in the images a rich tapestry of color and ethnicities.  The little boy’s earnest face speaks volumes about the importance of prayer.

A nondenominational book about prayers, need and community support, this book celebrates the power of faith in a way that children will easily relate to.  Appropriate for ages 4-6.