Last week School Library Journal released their list of the Best Books of 2014.  Their list has four categories:  Picture Books, Middle School, Young Adults and Nonfiction.  Plenty to love in their lists!

This week, Kirkus has released their list of the Best Children’s Books of 2014.  Their Teen list will be released next week.

The interesting thing is to note how many of the books are not on both lists, which gives us plenty of 2014 books to celebrate! 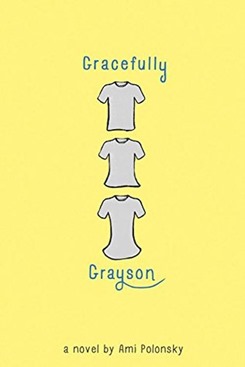 Grayson lives with his aunt, uncle and cousins after his parents died when he was much younger.  Middle school is hard.  Grayson doesn’t have friends, eating his lunch in the library rather than the cafeteria.  He rarely does anything more than go to school and return home again.  After school, Grayson has time on his own before the others get home and he spends his time in front of the mirror dreaming of wearing a dress and being a princess.  It’s a fantasy he quickly puts away when the others come home, returning once again to being a boy in a long t-shirt and jeans.  Then one day, Grayson decides to go out for the school play.  And when he auditions, he tries out for the role of Persephone.  What will happen if he gets cast as the female lead and is no longer invisible?

Polonsky has created a critical book for middle-graders about the experience of being transgender in middle school.  She hits just the right tone of lightness and seriousness, allowing the story of Grayson to unfold naturally and beautifully on the page.  The reader learns along with Grayson what he is really feeling inside, how he wishes to express it, and also how incredibly brave he is.  He’s an incredible character, one that is relatable and inspiring.

Polonsky also does not duck away from negative reactions to Grayson.  In Grayson’s aunt, readers will see an adult who is struggling to understand someone who is transgender.  She seeks to protect Grayson from bullies by hiding what he truly is and goes after the teacher who is helping Grayson express who he is on the inside.  There are also bullies at Grayson’s school who play a part in his isolation.   Yet there are also heroes among the students as well as Grayson’s uncle who is supportive.  It’s a strong mix of reactions, showing that while there is hate there is also love and support.

An important book for middle-grade children about being transgender and being true to yourself.  Appropriate for ages 10-13. 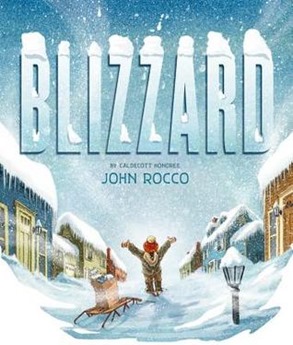 Rocco tells a story from his childhood of the blizzard of 1978 that dumped 53 inches of snow on his Rhode Island town.  The story begins with just a few flakes in the air and by the time school closes and the children make their way home, the snow is getting deeper and deeper.  The next morning, the drifts were so high that they had to leave the house through the window rather than the door.  The snowplows stopped running because the snow was too deep.  They were isolated and at first it was great fun with days of playing in the snow and drinking mugs of hot cocoa with milk.  Then after a few days, food got scarcer and the cocoa was being made with water.  It was up to a ten-year-old John to make his way to the grocery store pulling his sled with tennis rackets strapped to his feet.

Rocco embraces the wonder of a huge snowfall in this picture book.  The delight of a landscape and world changed into something foreign and incredible.  The changes to routine, the cancelation of school, families stuck inside together, the futility of trying to dig out paths.  He celebrates it all on the page and then moves the story to an arctic exploration of one boy against the elements, complete with a map of his route to the store.  There is a rich humor throughout the narrative that reassures children that the family is not going to starve but also offers real reason to travel to the store, watery cocoa!

Rocco’s art cleverly incorporates the days of the week in the art, from snow on branches spelling out the word to a squirrels trail on the roof.  The cool white and blues of the outdoors are contrasted fully with the yellows of the indoor world of the family.  The disjointed attempts at clearing the snow are cleverly done, speaking to the power of intent but also the depth of the snow and the effort required to clear it.

Perfect for folks in Buffalo, but also a great story to read when any snowstorm is drifting your way, preferably with mugs of milk hot cocoa.  Appropriate for ages 4-6.