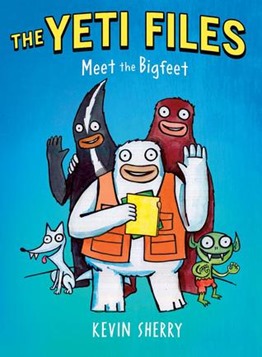 The Yeti Files: Meet the Bigfeet by Kevin Sherry

The author of I’m the Biggest Thing in the Ocean and other picture books has released his first book for early readers.  It is the story of Blizz Richards, a yeti who lives an isolated life in Nepal.  He has a great cave for a house that he’s filled with all sorts of cool gadgets and lots of things to play on.  He is a cryptid, and as one he has taken an oath to never be seen by the outside world.  So Blizz almost never sees his family.  But all that is about to change with the announcement of an upcoming Big Feet Family Reunion.  Blizz shares the story of Brian, one of his relatives in Canada who got spotted and had his picture taken and put up on the Internet.  It was all because of George Vanquist, a man who continues to seek out cryptids and expose them.  Now Blizz has to risk it all to see his family, rescue Brian from his shame of being exposed and avoid George Vanquist along the way.

Sherry has such a great touch for humor.  Throughout the book there are moments of hilarity that children will adore.  He also manages to create unique characters even in this very simple format.  Blizz manages to be a cool character, someone who lives a rich life despite being mostly alone.  He does have several clever smaller creatures who live with him and who help out regularly throughout the story.  The book moves along at rocket speed, helped by the large number of illustrations which will make it a welcoming read for new readers.

The illustrations have the same clarity as Sherry’s picture books.  With simple lines, he creates entire worlds here with characters who express emotions clearly.  One of the best parts of this book are the little diagrams throughout, first of what a yeti really is, then showing Blizz’s house, and next explaining cryptids,  They are clever, funny and avoid creating large paragraphs of explanation.

Filled with humor and the same distinctive illustration style as his picture books, this early reader will appeal to any child looking for some giggles.  Appropriate for ages 5-7.

Reviewed from copy received from Scholastic.

The 2014 list of Publisher’s Weekly starred reviews of children’s books has been released and is available for free on their website.  This second edition of their annual guide has over 350 starred titles as well as interviews with some great authors including Rick Yancey, Jandy Nelson, Ashley Bryan and Laurie Halse Anderson.  Enjoy!