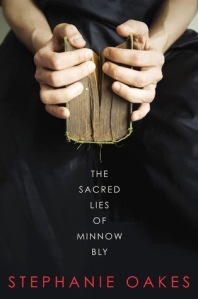 The Sacred Lies of Minnow Bly by Stephanie Oakes (InfoSoup)

Raised in a cult, Minnow left normal life behind at age 5 to start a new life in the wilderness with her family, other believers, and the Prophet. Minnow was taught to obey, to fear outsiders, to hate people of color, and to not think for herself. When she started to drift too far from the Community’s teachings, she was punished by having her hands cut off. Now she has been taken into custody after attacking a boy. In juvenile detention, she has plenty of time to think about what she has done and all that has happened to her. Her family is in tatters, her community burned to the ground, and Minnow had a part in all of it. Minnow now has to decide how to share the truth and how much of it she can tell without causing even more harm to those she is trying to protect. She also has to figure out what to believe in and how to trust herself at all.

Oakes has adapted a tale from the Brother’s Grimm as the basis of this story. You can hear the echo of those brutal times throughout this novel for teens. The truth of Minnow’s life is told in fits and starts through flashbacks which makes for tantalizing reading and a book that is impossible to put down. Oakes’ portrayal of the cult is very effective, from the wild premises of the faith itself to its leader, the cult is a devastating mixture of the ridiculous and the savage. Trapped in that world, Minnow learns to find beauty where she can and friends in the most unlikely of people and places. The life in the cult contrasts eerily with the order of juvenile detention where there is violence but also protection, enemies but also friends.

Minnow is a protagonist who begins the book almost like a wounded animal with her faith shattered but still clearly influencing her reactions. As the book progresses and she learns not only who she can trust but also of her own strength and her own duty to herself, Minnow grows and evolves. Not only does she turn away from things that she was clinging to in the beginning, but her own beliefs and language change along the way. The growth is organic and subtle. Minnow also thinks in poetry, connected to the wilderness where she spent most of her life. She sees things through that lens, and the beauty of that place returns to her and the reader again and again throughout the novel, strong and pure and lovely.

A book that wrestles with family, faith and truth, this teen novel is a dark and powerful read. Appropriate for ages 14-18.

Reviewed from ARC received from Dial.