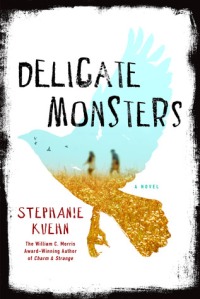 Sadie has to return to her family home and public high school after being kicked out of her third boarding school in four years. Sadie can’t seem to keep out of trouble. It could be that she doesn’t care about anything much at all, and definitely not how other people feel. Though she is intrigued to see a boy she knew in her childhood again. Emerson has a deep crush on May, a girl that he lusts after longingly. When Sadie arrives back though, trouble follows and she witnesses Emerson do something that could ruin him entirely. Meanwhile Emerson’s younger brother Miles is struggling too. He has seizures and when he has one, he can see the future. He’s just had a vision of a dark future for himself and he shares that with Sadie. Now the three of them are entwined in a brutal future of their own making and possibly one they can’t escape, because Miles’ visions always come true.

Kuehn has written a very unique book here. First, she does not try to make any of these characters ones that you relate to easily or particularly like. In fact, they are all rather detestable. From the rich girl who doesn’t feel emotions about others to the two brothers who are filled with a powerful mix of self hatred and violence. The themes here are quite mature with sex scenes as well as violence. It is a book that is haunting and frightening and compulsively readable.

Kuehn has carefully set the scene for trouble with a mix of wealth and poverty that makes for sparks between characters but also destructive flames that will harm and hurt. She adds to that a vineyard where the three main characters spent a critical summer together and a series of reveals about the characters that are very disturbing. That slow peeling of the characters in front of the reader creates a blazing book that is a great read. The ending (which I will not spoil) will frustrate some readers and leave others very satisfied. For me, it was the perfect ending for a book like this.