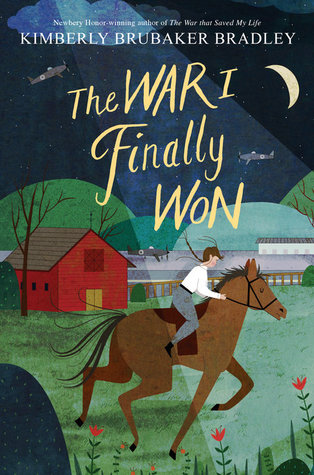 This is a marvelous sequel to the award-winning The War That Saved My Life. Ada has just gotten her club foot surgically repaired in the beginning of this new novel. Due to their home being destroyed, Ada and her brother along with Susan, their guardian, must move into a small cottage on the land owned by Lady and Lord Thornton. As World War II continues, they face food shortages, hard work, and then are asked to house a German refugee while Susan teaches her math. Though her foot is fixed, Ada continues to wrestle with her disability and how it factored in to her mother’s abuse. Once again horses are on the scene to help with healing, both physical and mental, as unlikely friendships and bonds are formed in a small cottage.

Bradley writes books that don’t just draw you in, they captivate you. It was so wonderful to return to Ada’s story and find out what happens to beloved characters. In this sequel, more is shown of the stern Lady Thornton and Bradley demonstrates that with more knowledge comes more understanding. Ada continues to be a dynamic character, never easy with life or her own role in it. And yet as Ada is prickly and abrupt, she is also warm and inquisitive, looking for answers and asking questions.

Bradley wrestles with dark themes in both of the novels in this series. There is the physical and mental abuse that Ada suffered at the hands of her mother. There is the ongoing war that threatens everyone’s safety. There is the loss of beloved characters due to that war. Still, she also shines hope. Hope for progress forward, for learning more, for accepting differences and for building friendships. The tension between all of this is remarkably well-handled and creates a book that is riveting to read.

A sequel that is just as good as the first, get this into the hands of fans. Appropriate for ages 9-12.