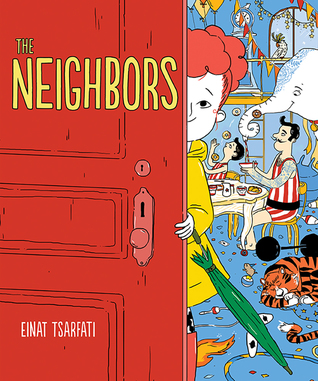 A little girl with a big imagination lives in a seven-story building. On her way up to the seventh floor, where she lives, she imagines who lives behind each of the other doors. Each floor has a different door with things outside that give her clues to the type of family or person who might live there. She imagines that the door with many locks and lots of security leads to a family of thieves. Another door with lots of plants outside opens to a jungle lived in by an old explorer and his pet tiger. As she climbs higher, her imagination gets wilder, filling the apartments with vampires, pirates and mermaids. Her home is the most mundane, or is it?

Told in first person by the little girl, this book builds off of a straightforward concept and into a world of make-believe. The text is simple, steadily counting upwards as the girl ascends the stairs. The girl’s imagination is vivid and captivating with much of it being shown in the illustrations rather than being told in the text.

The illustrations are done in bright colors, moving from the white backgrounds of the stairway and hall to bright colors that each imaginative family lives inside. Their apartments are filled with details that are worth lingering over too.

A very enjoyable look at living in an apartment building and using one’s imagination. Appropriate for ages 3-5.

Reviewed from copy provided by Abrams.