A family of father, mother and baby play across the pages of this picture book. As the sun begins to set, they head home from a day outside. Baby heads across the floor, crawling and almost standing. As dinner is being made, he throws things out of his playpen. Then he gets to bang pots and pans for awhile before dinner. He gets fussy and hungry just in time to make a tremendous mess eating. Then it’s bath time before getting ready for bed. The family dances together until it’s time for stories and sleep.

This book is just perfect for little ones, allowing brown babies to see themselves on the page and babies of other colors to celebrate them. The family is warm and lovely, just right for a toddler bedtime read. The cozy factor is huge here, rather like a hug made into a book. The sprinkling of Spanish phrases throughout the story adds so much. Ford’s illustrations glow with warmth on the page, filling them with toddler activities in a busy family.

A beautiful glimpse of an evening in the life of a family. Appropriate for ages 1-3. 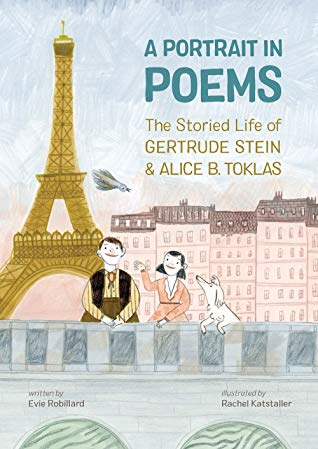 Portrait in Poems: The Storied Life of Gertrude Stein & Alice B. Toklas by Evie Robillard, illustrated by Rachel Katstaller (9781525300561)

Enter the marvelous world of Gertrude Stein and her partner Alice B. Toklas in France in the middle of the 20th century. Stein created an art gallery in her home after moving to Paris with her brother. They purchased from many incredible artists of the time, including Picasso. In fact, Picasso was so taken with Stein that he had her sit for a portrait which he then gave to her as a gift. Saturday evenings, they opened their home so that others could see the art. Stein was both a writer and a genius, working on capturing her world in words for both adults and children. Stein and Toklas purchased a dog they called Basket, that was featured in Stein’s work, including the “autobiography” she wrote about Alice.

Robillard captures the essence of the life that Stein and Toklas created together, one of acceptance and adoration for one another. Her author’s note speaks to the complexity of their life in World War II France as well as their relationships with those who conspired with the Germans, which likely allowed them to keep their collection of masterpieces safe during the invasion. These elements are not referred to in the body of the book, instead focusing on the art collection, the world they built for themselves, and Stein’s writing and ideas.

Fitting nicely with the clever writing, the illustrations are playful and jovial with a great quirkiness as well. The images depict Gertrude and Alice together, their garden, their home and Basket as well in a color palette that feels timely and modern.

A lovely picture book biography that celebrates an iconic lesbian couple in history. Appropriate for ages 6-9.