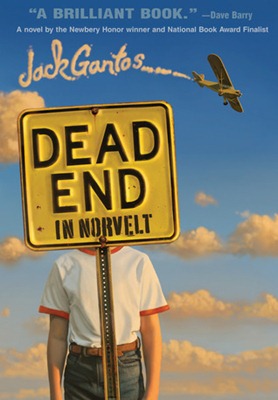 Gantos’ latest may just be one of his best, and with his successes before now, that is certainly saying something.  The book is an intriguing mix of memoir and fiction that has a protagonist named “Jack Gantos.”  Jack is a boy who loves history, war movies, and playing with his father’s war trophies, including a Japanese rifle.  When Jack takes a pretend shot at the outdoor movie theater screen from a long way away, the rifle actually goes off.  Jack gets caught in his parent’s feud over the use of a field, and ends up grounded for the summer.  The only way he gets to leave is to help a neighbor write the local obituaries.  Over the summer, he begins to help with more, including driving her on her other job of medical examiner.  When the original residents of their town start to die off, the question becomes if it’s murder or just old age.   One thing is for sure, you have to pay attention to history to figure it all out.

The writing in this book is clever and witty.  One never quite knows what is going to happen next, what new character will enter the story, or where it will go.  It’s a rollercoaster of a book, but one that is strong and steady as well.  Readers are in wild but good hands here.

Gantos has populated his story with all sorts of characters.  Jack is a boy whose nose gushes blood whenever he is scared, shocked, surprised, or emotional.  It becomes a barometer in the story of his emotions, and is just the first oddity of the book.  The neighbor lady who writes the obituaries is a character who is feisty, elderly, smart and sassy.  She is an unusual character for a tween/teen novel and one that enlivens the entire book.  Then there seem to be endless others that could be listed.  There is the police officer who rides a tricycle, the dead Hell’s Angels member who danced into town and could be carrying a plague, and Jack’s feuding parents too.

Norvelt is a great setting for a book.  It was a town created by Eleanor Roosevelt to give poor people a good start.  The economy was based on bartering, but that has fallen apart during these later years.  Now the homes are starting to empty, no new people want to move to town, and some homes are being sold and hauled away.  It is a town in disrepair that is not aging well.  Rather like the townsfolk themselves.

A great read, this book has murder, some mayhem, and plenty of blood (though it comes out of Jack’s nose).   Get this into the hands of tweens and teens who enjoy humor and a bit of mystery.  Appropriate for ages 12-15.

One thought on “Book Review: Dead End in Norvelt by Jack Gantos”