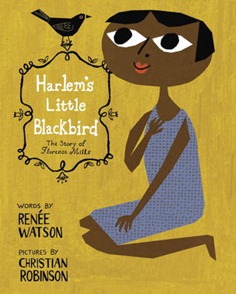 This is a picture book biography of Florence Mills, a singer well-known during the Harlem Renaissance.  It follows her from her childhood as the daughter of former slaves in a tiny house in Washington, DC. where she was always singing and dancing.  She became known as a small girl with a big voice, but often faced racism and segregation when she was performing.  She quickly learned to use her voice for activism as well as song.  Florence became known not only across the nation but around the world for her voice.  She traveled internationally, and continued to be an activist and to give back to the poor.  Applauded for her singing, this book celebrates her good deeds just as much as her voice.

Watson writes a compelling story of a woman who was more than a beautiful songbird.  She fought back against the bigotry of her time and also gave back to the community she came from.  Watson distills Mills’ story into one that children can easily relate to.  It exposes the overt racism of a previous time and will give children much to discuss about how far our society has come and how much farther we have to go.

Robinson’s illustrations are done in cut-paper and collage.  They have a great texture to them, often showing a physical depth that is very appealing.  The colors are bright and vibrant, fitting colors for this equally vibrant woman.

A very successful picture book biography of a woman whose voice broke down barriers along with her good work.  Appropriate for ages 7-9.