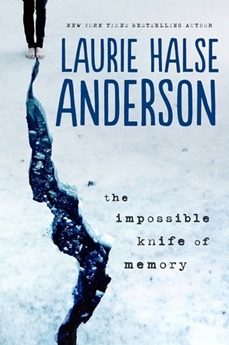 The Impossible Knife of Memory by Laurie Halse Anderson

The amazing Laurie Halse Anderson returns with a book that is powerful, thought-provoking and personal.  Hayley and her father just have each other.  For the past five years after her mother’s death, they have been hauling freight in his truck.  But now they have returned to her father’s home town so that Hayley can finish high school and live in a normal home.  However, their home is anything but normal.  Her father can’t hold down a job because of the images and flashbacks that come over him from his time in Iraq.  He drinks to keep the visions at bay, but then blacks out and forgets what he has done.  He has never hurt Hayley, but he is getting worse rather than better and Hayley is all alone in dealing with him.  At the same time, Hayley is slowly making friends at school, particularly Finn, a boy who has his own family issues to contend with.  As things at home get darker and more dangerous, Hayley has to figure out who she can trust to help, if anyone.

Anderson has written a book about PTSD and the traumas of being a soldier that speak to vets from any war.  She herself was the child of a vet from World War II and has a father who struggled himself with these issues.  Thanks to this personal connection, her book goes deep below the skin into the world of Hayley, her love for her father, and truly connects with the horrors of heroes who return home just to be haunted by what they have done and seen.

Hayley is a strong character but also deeply flawed.  She is hidden behind so many protective layers that readers discover her as she gets to know Finn.  She slowly reveals a bright intelligence and witty humor.  Her relationship with her father is one based on adoration but also on pure coping with his disabilities.  She herself has faulty memories and blank places that she refuses to focus on and think about.  She too is hiding from her memories, but in her case they are the happy ones.

This book is deep, dark and haunting.  Anderson writes with consummate skill here and looks beyond the headlines into what PTSD in a family member truly means.  Appropriate for ages 14-18.

Paul is a fish who just circles his bowl, over and over again in different patterns.  But his life changes when Bernadette joins him in his bowl.  She shows him the world beyond his bowl.  They can see boats, forests filled with colorful trees, a cactus, and even an elephant with babies.  Of course, what they are thinking they see isn’t really what is there.  The objects are far more mundane: bananas, flowers, a clock and a teapot and cups.  Paul’s entire world expanded and made room for the outside world but most especially for Bernadette.

Lamb’s book combines a gentle humor with a warm charm.  It is a story about the power of one person to open the other’s vision and imagination.  It is about transformation but also being able to transform while staying right where you are.  Lamb’s illustrations are done in paint, daubed thick enough at times to add plenty of texture to the images.  The colors are subtle, the globe the fish live in almost bubble-like as it floats on the page.

This delightful picture book will have young readers wondering what Paul and Bernadette would see in their room too.  Appropriate for ages 3-5.