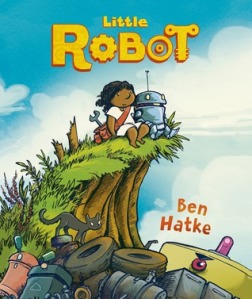 The author and illustrator of the Zita the Spacegirl series returns with a lovely graphic novel that is nearly wordless. A little girl climbs out of her bedroom window and heads out into the nearby junkyard where she discovers a strange round object. Upon pressing the button on top, the object transforms into a small robot that has trouble even staying on its feet. But the little robot has been missed in the factory and a huge robot is coming to reclaim it. Meanwhile, the girl and the robot make friends with cats, discover flowers, skip rocks, and play tag. That’s when they realize that another robot is on its way. Now the girl has to figure out how to keep the robot safe while she is also learning the skills of being a good friend.

Hatke has a wonderful sense of story in this graphic novel. The fact that he can tell such a varied story with so few words is testament to the power of his artwork. The story moves from quiet moments of connection between the girl and the robot to times of fast action and chases. Those little quiet moments are presented with a gorgeous solemnity that is occasionally made even richer by moments of humor. The action is riveting and sharp, contrasting beautifully with the quieter moments. The pacing is dynamic and energetic, creating a book that can easily be devoured in mere minutes.

Yet the book is also worth lingering over. The connection between the two main characters is told in such a shining way that this is not a book to rush through. The balance of the book is so well done, from the design of the pages to the skill used to keep readers fascinated and also touched by the budding friendship. Hatke should be congratulated for creating a book with an African-American girl as the one who is drawn to tools and robots. She often uses her tools to fix things, showing that she has knowledge as well as interest. The incorporation of STEM is done with subtlety and yet is also pervasive through the entire book.

Strong and lovely, this graphic novel for younger readers will entrance lovers of robots and science fiction. It’s also a great pick for those ages that are a bit young for most graphic novels but still long to be reading them as well as for young reluctant readers who will enjoy the illustrations and the little bit of text. Appropriate for ages 4-7.

Reviewed from digital galley received from First Second and Edelweiss. 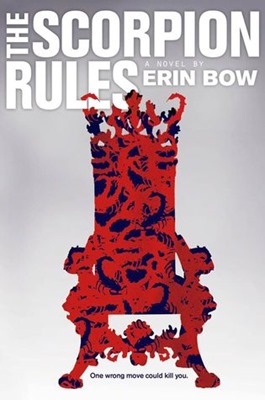 400 years in the future, the world is ruled by an artificial intelligence named Talis who has the ability to blow up cities if they fail to follow his rules. Talis also demands that any ruler in the world give up a child to be held hostage. That child is raised as a Child of Peace in small schools called Preceptures. If their parent decides to go to war with another region, that child is immediately put to death. Greta has been living in a Canadian Precepture since she was five. She is the Duchess of Halifax and the Crown Princess of the Pan-Polar Confederation. She knows her destiny is either to die or to leave the Prefecture at age 18 to become the ruler of her confederation. But everything changes when a new boy enters the Prefecture, a boy not raised to be a ruler but instead raised on a sheep farm and a boy unwilling to submit to the rules of the school or the world. As Greta grows closer to Elian, she begins to question the rules she has embraced all of her life. But their countries are about to declare war upon one another, so Greta’s time is coming to a close alongside Elian and before Greta has truly learned to live.

I am in awe, seriously. I adored Bow’s previous book that merged Native Americans with zombies. So I was happy to see another book by her and then shocked to have it so wildly different. Shocked in a good way, where you realize the breadth of a writer’s vision and skill. Bow manages to create a world where machines rule and it all makes sense. She casually throws around technology terms and they all work as well. This is not a world that is a strain to see coming, but rather one that is so psychologically logical as a result of our current world that it is bruisingly beautifully complete.

Greta is a an elegant character, a bundle of contradictions held together solely by the constraints of the world she finds herself in. She is a natural ruler, even among other teens who are born to lead. She comports herself with dignity always, her greatest fear being to let her people down. And then into that constricted life comes Elian, filled with humor, laughter and bravery. Greta changes, slowly and steadily, from ruler to human in the greatest sense. It is beautiful to witness, believable and tragically timed.

I would do this book a disservice if I didn’t talk about its diversity. The characters are all diverse and unique, the group of older teens come from all parts of the world. And the diversity doesn’t end there, because there is also a lush and lovely lesbian romance alongside a gay one where it is portrayed with all of the beauty and romance one could want.