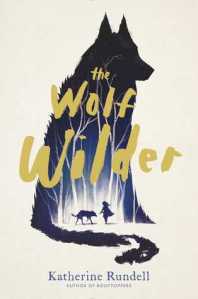 Feo lives with her mother in the Russian wilderness, away from any civilization. They are the people who are sent the wolves who have been reared in luxury in Russian homes. It is bad luck to kill a wolf, so the wolves are given to Feo and her mother to release into the wild. Feo has three wolves who are very special to her, Black, White and Gray. The three live in a nearby chapel that is slowly decaying. They are fully wild, but love Feo too, accepting her as part of their pack. Things are changing in Russia and some people don’t like wolves and the damage they do to livestock. So soldiers come and threaten Feo and her mother, including a man named Rakov who is brutal and cruel. Feo and her mother get another pampered wolf and when she gives birth a young soldier of Rakov’s emerges from the tree and is enchanted by Feo and her wolves. Feo will need his help when her mother is taken to prison in a far-away city and Feo sets off on a quest to free her.

Rundell is one of my favorite authors writing today. Her books are so different from one another, set in completely different times and places. Yet the thing that binds them all together is Rundell’s exceptional story telling. All of her books have strong young heroines, girls who have been raised in unusual circumstances and have grown to be wild women of the very best kind. Feo is the epitome of a wild woman, a girl who raises wolves, who teaches them to be wild and free, who adores the cold and snow, and who is brave enough to cross Russia to save her mother. Feo is not perfect. She is prickly and often unable to express her emotions. Her hugs are brutally hard, her determination unshakeable even when leading her straight into danger, and yet she is loyal and immensely big hearted in a way that will have all readers cheering her on.

Rundell’s writing is exceptional. She writes with her own ferocity, words tumbling and creating such strong imagery and amazing juxtapositions. She creates an entire snowy world for Feo to inhabit, filled with wolves who love deeply, hills to ski down madly, and trees to climb to safety. Here is how Feo sees her snowy home:

Feo loved it. The land around the house shook and shone with life. She had seen people pass by her wood bewailing the sameness of the white landscape, but, Feo thought, they were just illiterate: They hadn’t learned how to read the world properly. The snow gossiped and hinted of storms and birds. It told a new story every morning. Feo grinned and sniffed the sharpness of the air. “It’s the most talkative weather there is…”

Another amazing read from Rundell, get this into the hands of any young wolf girls you know. Appropriate for ages 9-12.

Reviewed from ARC received from Simon and Schuster.

Fire Engine No. 9 by Mike Austin

This picture book embraces the drama of responding to a fire, showing firefighters sliding down their pole, heading out to the fire, and then putting it out. Along the way, they hook the hose up to the fire hydrant, save a baby, and head directly into the burning building. The book is filled with sounds like alarms sounding, sirens blaring, smashing windows, and the water rushing out of the hose. Climactic and action-filled, this picture book is perfect for the youngest fire-fighting enthusiasts.

Short and filled with almost entirely words that relate to the sounds of a fire response, this book reads quickly and effortlessly. The pacing is frenetic but also systematic like the response itself. The entire book has the feel of excitement but also of an elite team that is prepared to help people.

The art is vibrant and filled with motion. When the fire engine is rushing to the fire, the entire vehicle leans forward with the speed. Dark smoke appears on the page as they reach the fire, billowing over the rest of the city. Bright reds are used very effectively as a background color to amp up the drama and imply the heat of the fire. One of the firefighters is revealed to be a woman at the end of the book, something got a cheer out of me.

Sirens, trucks, action and rescues make this simple book about fire fighters a dynamic pick for toddlers. Appropriate for ages 2-4.