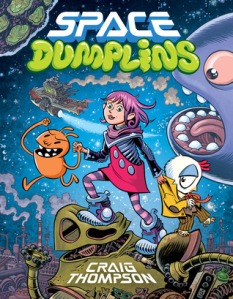 Violet and her family live happily together in an asteroid belt where her mother is a clothing designer and her father salvages items from outer space. Then Violet’s school is eaten in a space whale feeding frenzy and she has to go to work with her mother. While they are there, more whale attacks happen and her father disappears. Violet decides that she has to find out what happened to him. She gathers two friends together, one of them a snazzily dressed chicken and the other the last of the Lumpkins. But there are many dangers in space and Violet and her friends get set upon by space gangs, have to traverse a ring of trash, and then must figure out why the whales are on a rampage. It’s up to Violet to save her dad and she just might save the entire galaxy along the way.

Thompson is the acclaimed author of graphic novels like Blankets and Habibi. This is his first graphic novel for young readers and with it he demonstrates his immense skill in writing for any age. Violet is a strong and fierce female protagonist who is the one running into danger to save others, and I love a girl who works to save her father in space. It’s a great feminist twist on a more traditional structure. Louis, the chicken, is also a great male character who also is non-stereotypical and loves his clothes and not adventuring in space. Additionally, the book uses humor constantly, creating a book filled with puns and laughter, just what I’d want in any space adventure.

Thompson’s art is wonderfully strong. He takes the time to show young readers not only the outside of the spacecrafts but the insides as well using cutaways of the hulls. The various worlds and space structures that they visit are unique and diverse, creating a full sense of adventure as the book moves along. Thompson never forgets that this is a science fiction book, keeping the art and the story fully grounded in that world and setting. He also manages to include themes of environmentalism and individuality very successfully.

Another strong girl to join Zita the Spacegirl in taking readers to space and the stars. Appropriate for ages 8-11.

Reviewed from ARC received from GRAPHIX.

Evan had a new set of crayons that were perfect until he accidentally broke the brown crayon. He tried to fix it by pressing it together and taping it, but nothing worked. Then Evan realized that one broken crayon is actually two crayons! As Evan continued to color, more crayons snapped. When he stepped on one, he found that he could create different things with the crushed color and with others without wrappers. Evan’s only green crayon disappeared under the stairs and then he didn’t have any green at all, until he discovered that yellow and blue combined to make green. Soon Evan was mixing all sorts of colors. Finally he is left with only three colors: red, blue and green and no space to color any more. But Evan has starting thinking in new ways and finds a way to make new discoveries and art.

Hutchins has taken a universal moment in childhood, when the first crayon breaks and made it into a celebration of creativity and thinking in new ways. The discoveries outweigh the loss of a whole crayon, creating new opportunities and new ways to color and draw. The part where he steps on a crayon is so well done, allowing youngsters to see situations like that as a chance for discovery. Throughout the tone is jolly and inviting, just the antidote to perfectionism we need.

Petričić’s art is very appealing. Evan is a boy who is colored the same bright colors as his crayons, allowing him to pop on the page even as it fills with art. At the same time, he is rendered partially as an uncolored person, which makes for a very modern and intriguing look. The scribbles and child art are done well, always filled with experimentation and ideas.

Combine this with a crayon craft and you will have a great program, just be ready for some of the children to snap your crayons on purpose! Appropriate for ages 2-4.

Reviewed from digital galley received from Annick Press and NetGalley.