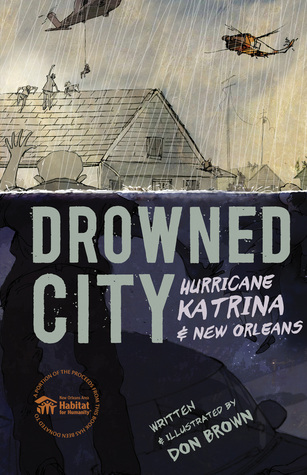 This powerful graphic novel tells the story of Hurricane Katrina from the very beginning as the hurricane forms and grows in power to the slow recovery of New Orleans in the aftermath. As the winds and rains of the storm breach the levees around the city, readers will see the devastation that occurs as 80% of the city floods. The book tells the true story, one where everyday people are heroes, where supplies and help are not sent in a timely way, where presidents make appearances but don’t remedy the problems, and where people looking for help just find more death and despair. It is also the story of selfless people who come in and make a real difference, of rescues and saved lives. It is in short, a true story that unflinchingly tells the story of a storm and a city.

With an enormous list of references and sources at the back of the book, this graphic novel is based entirely on facts and first-person accounts. Brown tells the tale without any need to make it more dramatic, just offering facts about what happened and what went wrong to make it even worse. Brown’s account though is also filled with humanity, offering glimpses of the horrors that people survived, of the losses as they mounted, and of a world turned upside down for people trying to escape the city.

Brown’s art in this graphic novel is done mostly in browns and greens. There are striking pages that stop a reader for awhile, such as the art on pages 30 and 31 which has dead bodies floating past in purple water, even as survivors are being hauled up to a roof. Brown conveys the heat and the desperation of survivors, the desolation of the flooded city, and then the slow rebuilding process.

A riveting and powerful look at one of the worst disasters in American history, this graphic novel is a way to talk with children about Hurricane Katrina. Appropriate for ages 8-12.