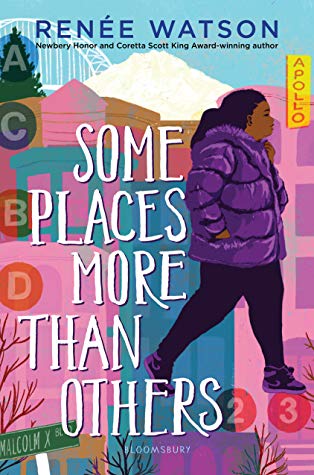 When a project about family is assigned at school, Amara realizes that there is a lot she doesn’t know about her own family. Her mothers’ parents are both dead and she had no siblings, but her father’s side lives across the country in Harlem. Amara asks if she could travel to Harlem to see her grandfather whom she only knows from phone calls and cards, since her father often goes there on business. Her parents refuse for some time, then agree to allow her to go. It will be the first time in twelve years that her father sees his own father. Now it is Amara’s job to complete her school assignment by interviewing family members, explore New York City and also bring her family back together, all in a single week!

Newbery Honor winner, Watson brings her considerable writing skill to a fractured family. She captures how forgiveness is difficult even though love is still there and allows the connection between father and son to organically rebuild. All of this is seen through Amara’s eyes as she discovers that her family is different than she realized and that her father has a surprising history she knew nothing about.

Setting is so important in this novel with Harlem and New York City becoming characters in Amara’s story. Many important places in African-American history are explored including the Apollo Theater and the Schomburg Center. Murals and sculptures that feature African-American figures in history are also featured in the story. Readers will want to explore these streets themselves.

A warm and rich exploration of complicated family relationships and love. Appropriate for ages 9-12.