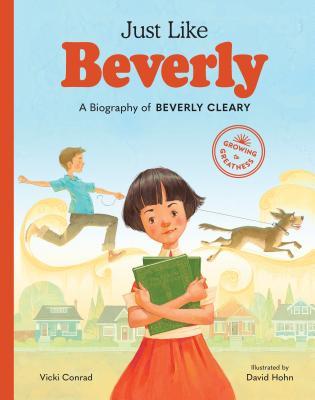 Just Like Beverly: A Biography of Beverly Cleary by Vicki Conrad, illustrated by David Hohn (9781632172228)

Growing up in Yamhill, Oregon, Beverly spent her days on the family farm with animals for friends. She only had two books growing up, so she made up her own stories instead. When her mother got a children’s library created in Yamhill, Beverly finally had access to more stories. After moving to Portland, Beverly started school, determined to learn to read in class. Numbers were easy for her, but reading was hard. It didn’t help when she had to stay out of school for weeks due to smallpox. It wasn’t until the following year that she got a teacher who put in extra effort with Beverly to help her learn to read. Soon she was writing too and eventually became a librarian. When Beverly heard children asking for stories about kids like them, she was inspired to try her hand at writing children’s books!

Conrad has created an engaging biography where readers can see Cleary’s inspiration from her own childhood reflected in her books for children. The difficulty that Cleary had learning to read is shown in great detail, echoing the immense effort it took to learn. It is inspirational for children who may be having difficulty learning to read to see someone who eventually became one of the most famous children’s authors of all time having the same problems.

The art by Hohn is bright and friendly. The use of period clothing really helps place the book in the past visually and keeps the bright-eyed Beverly from feeling too modern. It also shows the great sense of humor that Cleary had throughout her life.

An inspiring story of triumph and achievement. Appropriate for ages 6-9.

One thought on “Review: Just Like Beverly by Vicki Conrad”