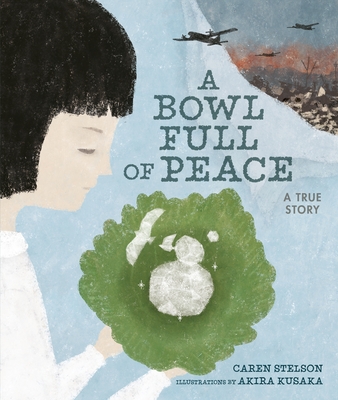 Grandmother’s bowl is precious for their family. Sachiko and family live in Nagasaki. At dinner, grandmother’s bowl is brought out and filled with food, Everyone bows their heads, pressing their hands together and says “itadakimasu.” Soon war comes to Nagasaki with its noises and the lack of food and other supplies. As the war continues and intensifies, the food in grandmother’s bowl changes too, becoming less and less. The family survives air raids, until one gets through. One of Sachiko’s siblings is killed in the blast. Her family leaves Nagasaki on foot, until they reach a hospital. Her brothers are very ill and both die from radiation from the bomb, other members of her family die too. Ice chips are all that help the survivors quench the burning. Two years later, Sachiko and her family return to Nagasaki and in the rubble of their home find grandmother’s bowl, unbroken and not even chipped. Going forward, ice chips are placed in the bowl on the anniversary of the bombing, watched as they melt away.

This picture book version of the award-winning book for older children, Sachiko: A Nagasaki Bomb Survivor’s Journey, allows the story of Sachiko to be shared with elementary-aged children. Stelson manages to pare the story down, writing in poetic lines that capture the horror of war and atomic bombing as well as the wonder of finding anything still intact afterwards. The symbolic nature of the bowl and the ice chips is incredibly moving and repeats in the book so that readers deeply understand the loss and work that must be done.

Kusaka’s illustrations are beautifully spare. She has created touching moments that show the family around their table with the bowl at the center. When the bomb hits, the pages turn from a red burst to blackness. It’s a powerful use of image without words.

A book about war with a strong focus on peace. Appropriate for ages 5-8.