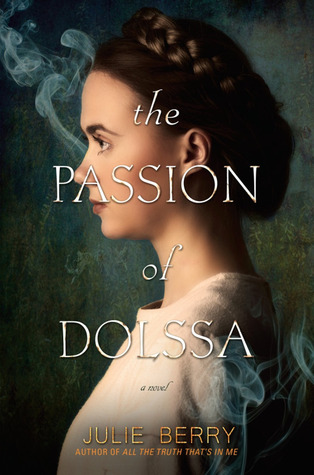 The Passion of Dolssa by Julie Berry (InfoSoup)

The author of All the Truth That’s in Me returns with another historical novel that once again speaks to the role of women in history. Here we follow the story of two very different young women in medieval France. There is Dolssa, born to wealth who speaks directly with Jesus and who gains the attention of the Church who brands her as a heretic and sentences her to death. There is Botille, who is a matchmaker and who owns a tavern along with her two sisters in a small seaside town. When their two stories collide, Botille discovers a person who both brings miracles and doom along with her.

Berry has created a novel that shows how power worked in the Middle Ages with two young women who are both products of their society and also find themselves outside of it some of the time. The two young women are as different as can be, both in their backgrounds and in their beliefs, but still between them there is a sisterhood that cannot be denied and a love that is transcendent.

Each of the women is fully formed on the page, shown in all of their questioning, their doubts and their beliefs. While Dolssa is certainly a different creature than Botille, it is the two of them together that is so brilliant it can be painful to read, particularly because there is no doubt that they are risking everything to support one another. Berry makes sure that readers understand the way that the Crusades and then the Inquisition worked, the holy people left to starve due to their heresy and the flames and torture that accompanied their work in France. It is a world of cruelty, particularly for two young women who have the audacity to think for themselves.

Brilliantly crafted, well researched and filled with the darkness of impending doom yet lit brightly with faith and miracles, this is a wrenching historical read. Appropriate for ages 14-18.

2 thoughts on “The Passion of Dolssa by Julie Berry”