This is one of the big winners of the ALA Awards this year.  It won the Stonewall Book Award, the Pura Belpre Author Award, a Printz Honor, and was on the YALSA Best Fiction for Young Adults list.  So I’m not sure what I can say about it beyond that it is one incredible read!

Ari has his entire empty summer ahead of him so he one day he heads to the pool even though he can’t swim.  There he meets Dante, a confident boy just his age, who offers to teach him to swim.  Through that one act, the friendship between these two loners is formed.  They have very little in common except that they are both Mexican Americans.  Ari tends to be angry, is able and willing to fight, and can’t communicate with his father.  Dante, on the other hand, goes to a private school, reads poetry, sketches and actually gives his father kisses.  The two boys form a strong bond with one another, able to have long conversations and tell each other everything.  Well almost everything.

This book is an interplay of strength and fragility with Ari, the physically strong and more strident one, being actually the more fragile as you see deeper under the surface.  It is about the way that friendships form in unlikely places, flourish and potentially fall apart over small things.  It is a book of celebration, a book that wonders at the desert night filled with stars.  It is a book that explores what it means to be gay, what it means to have a best friend that is gay.  It is about being a hero, finding your truth and moving ahead past doubt.

Beautiful, strong and incredibly brave, this book reads like a poem read aloud by a best friend.  Appropriate for ages 16-18.

Each year the Association for Library Service to Children (ALSC), a division of the American Library Association, selects the best children’s books. Here are the selected lists for Older Readers, grades 6-8, ages 11-14, and All Ages:

Beyond Courage: The Untold Story of Jewish Resistance during the Holocaust by Doreen Rappaport

A Game for Swallows: To Die, to Leave, to Return by Zeina Abirached

Invincible Microbe: Tuberculosis and the Never-Ending Search for a Cure by Jim Murphy and Alison Blank

My Family for the War by Anne C. Voorhoeve

My Sister Lives on the Mantelpiece by Annabel Pitcher

The Revolution of Evelyn Serrano by Sonia Manzano

Son of a Gun by Anne de Graaf

Steve Jobs: The Man Who Thought Different by Karen Blumenthal 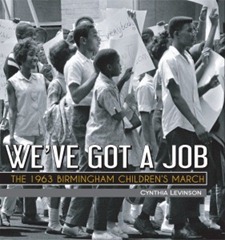 Temple Grandin: How the Girl Who Loved Cows Embraced Autism and Changed the World by Sy Montgomery

We’ve Got a Job: The 1963 Birmingham Children’s March by Cynthia Levinson

Step Gently Out by Helen Frost, illustrated by Rick Lieder

The Year Comes Round: Haiku through the Seasons by Sid Farrar, illustrated by Ilse Plume