VOYA (Voice of Youth Advocates) rates their reviews in two categories: quality and popularity.  Only 2% of the books for teens that they review get a perfect 5 in both categories, meaning that it would be “hard to imagine it better written” and “every young adult who reads was dying to read it yesterday.”  Here are those amazing few reads that VOYA gave a perfect ten:

As Dead as It Gets by Katie Alender

Between the Lines by Jodi Picoult and Samantha Van Leer

Bomb: The Race to Build – and Steal – the World’s Most Dangerous Weapon by Steven Sheinkin

Carnival of Souls by Melissa Marr

Don’t Turn Around by Michelle Gagnon

The Drowned Cities by Paolo Bacigalupi

Out of Sight, Out of Time by Ally Carter

The Secret Prophecy by Herbie Brennan

The Son of Neptune by Rick Riordan

Sons of the 613 by Michael Rubens

This Is So Not Happening by Kieran Scott

Through to You by Emily Hainsworth

What Came from the Stars by Gary D. Schmidt

Who Could That Be at This Hour? by Lemony Snicket 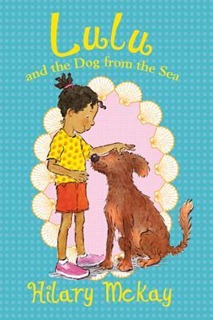 Lulu and the Dog from the Sea by Hilary McKay

This second book in the Lulu series continues the story of Lulu, a seven-year-old girl who loves all kinds of animals.  In this story, Lulu goes on vacation by the seaside with her parents, her dog,  and her cousin, Mellie, who is also seven.  At the seaside, they stay at a small cottage and Lulu quickly finds out about a stray dog who has been living off of garbage along the beach.  Lulu sets out to make friends with the dog, but no one else is enthusiastic.  Mellie just wants to build her kite, Lulu’s mother just wants to read the stack of books she brought along, and her dad wants to work on his running.  But Lulu knows that this stray is actually a very special dog, she just has to convince the rest of them.

McKay has a knack for creating characters and experiences that read as vibrantly true and honest.  In her books, there are lost kite bits, sand tracked into the house, trashed garbage cans, and too many shopping trips for forgotten items.  At the same time, there is also the love of a dog, a family that truly spends time with one another, and the success of plans coming together in the end, perhaps not exactly as planned.  As with her previous books, I have always wanted to live in a McKay novel in the midst of the loving mess.

I must also mention that this is an early reader series featuring a modern family of color.  Nothing is made of this fact in the stories.  It is just there, not a plot point, just a fact.  It’s handled with a matter-of-fact nature that I wish we saw more of in books for children.

A great addition to this growing series, the second Lulu book is sure to please fans of the first and bring new fans to the series too.  Appropriate for ages 6-8.

No adults live in Hokey Pokey, just kids.  They fall asleep right where they leave off playing and then jump up again to start playing the next day.  There are plenty of places to play: the Doll Farm, Thousand Puddles, Snuggle Stop, and Trucks.  Jack is one of the biggest kids at Hokey Pokey. He rides a legendary bike, Scramjet, captured from the herds of wild bicycles that roam the plains.  But when Jack wakes up one day, Scramjet has been taken and by a girl!  As Jubilee rides Scramjet around Hokey Pokey, everyone soon realizes that something is changing.  Jubilee paints the bike yellow but as she tries to get under Jack’s skin, Jack realizes that he himself is changing.  It must have something to do with hearing a train whistle no one else can hear.  But trains never come to Hokey Pokey despite the train tracks.

I was captured by this book the moment I read the first page.  I knew that I was in for a treat from Spinelli that is unlike anything he’s every written before.  This is a wonderfully wild and fanciful book that will remind readers of Peter Pan, yet it is brightly modern and not afraid to be dark too.  Spinelli uses a new language in Hokey Pokey, one that is easily understood but that also marks that we are somewhere new.  Take this description of children at play in Hokey Pokey, “…kids big and little everywhere streaking, leaping, chasing, shrieking, warring, hopscotching, footballing, hide-and-seeking, jumproping, hokeypoking, razzing, dazzing, runamucking, chuckleducking…”  The language he uses has a wonderful rhythm to it that is evident throughout the book.

The setting of Hokey Pokey is such a large part of this book.  Some places remain rather mysterious while others are completely explained in action in the story.  When readers are given a glimpse of some of the other wonders of Hokey Pokey, they can immediately relate to what it is because all of it is about childhood and play.  As Jack moves towards adolescence in the story, the book changes too.  It becomes more filled with questions, more angst pervades it.  This is a story of leaving childhood and all of its bright, candy-colored play behind and heading into the unknown.

Gloriously fun to read, this book was impossible for me not to love.  Spinelli writes with a lovely playfulness and yet beneath it all is truth.  A truly outstanding read for middle graders.  Appropriate for ages 10-13.