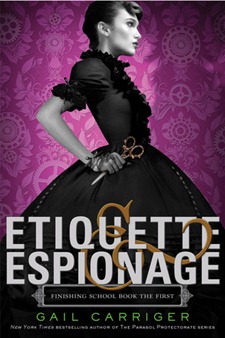 I must admit right up front that I haven’t read Carriger’s adult series The Parasol Protectorate.  So it is with fresh eyes that I came to the first book in her new teen series.  Here we meet Sophronia who at age 14 is rough and tumble enough for her mother to send her to a finishing school, hoping that she will learn proper manners and decorum before her older sister’s debutante ball.  Sophronia thinks she is being sent to a dull school only about curtsying and clothes, but Mademoiselle Geraldine’s Finishing Academy for Young Ladies of Quality turns out to be about far more than Victorian manners and society.  Instead Sophronia is thrust into adventure right from the trip to school, finding herself the heroine when they are attacked on their travels.  As she discovers her real gifts are embraced by her new school, much of which would chagrin and alarm her mother.  This blend of boarding school and steampunk espionage will not stay on library shelves for long!

Carriger has created a great world in her book, one that I understand is the same as that in her adult novels.  Populated with vampires and werewolves as well as humans, the world that Sophronia is sent to at school reveals that there is far more to life than her mother would approve of.  The setting of a school that floats in the air also adds that distance and isolation that works so well in boarding school novels.

Happily, Sophronia is a girl who loves adventure and though she may disdain her mother’s focus on fashion and decorum, begins to learn that as well.  She is a brave character, one that is unafraid to go against societal rules.  It makes for a book that is rambunctious and wildly fun while at the same time filled with wide skirts, hats and frippery.  It’s a charming mix.

With the popularity of steampunk, this is one book that belongs in every public library collection for teens.  With no sex and plenty of action, middle school readers will also enjoy it immensely. It’s a very fun read, so expect demand for the upcoming books as well.  Appropriate for ages 13-16.

I want to go to this school –> RT @librariancheryl: NYC to Name School in Honor Maurice Sendak http://huff.to/12Gz1wj via@HuffPostBooks

ALA LibraryLab – Google+ – the mingling of librarians and Boing Boing readers – http://buff.ly/XzMWR1

Your Brain on Books: 10 Things That Happen to Our Minds When We Read | OEDb http://buff.ly/159aOhK