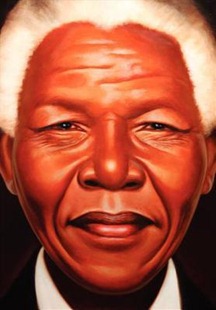 In a way that only Kadir Nelson could capture, this book tells the story of Nelson Mandela’s life, imprisonment and how he became the inspiration he is.  This is a very humanizing tale of Mendela, showing his childhood before his father’s death and then his move across South Africa to study under a powerful chief.   Mandela attended school and then got involved in fighting apartheid.  The book follows him as he is jailed the first time and as he rises to be a threat to those in power and goes into hiding.  Mandela returned to South Africa to continue the fight and is then jailed again, doing heavy labor.  After being in prison for over 27 years, Mandela was freed.  His passion for righting the wrongs of apartheid and speaking for equality of all people shines from every page.

Nelson tells the story of Mandela in verse that is factual but also compelling.  He captures the long time spent in prison in a way that children will be able to understand.  Cold meals, thin blankets and beating rocks into dust.  It shows the futility and the harshness with such clarity.  Nelson’s verse also has a great sense of awe for this man and what he has accomplished, that too makes it a very special, honest book.

As always, Nelson’s images are simply wondrous.  Here they seem to shine from within whenever Mandela is part of the image.  As you can see from the cover illustration, there is all of the human inside his art; it radiates from his work.  Shown with detail, interesting perspectives, and ending with a sense of celebration, Nelson’s art is a standout.

This is the story of Nelson Mandela captured fully in a picture book that celebrates all of his accomplishments and what he stands for as a human being.  Beautiful.  Appropriate for ages 6-9. 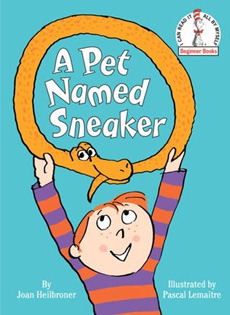 Sneaker was a snake who lived in a pet store and wanted to be taken home.  But no one seemed interested in a snake until one day Pete came into the store and noticed how special Sneaker was and decided to take him home.  The two invented games together, forming handcuffs and a hat out of Sneakers’ flexible body.  Then one day Pete had to go to school.  Sneaker didn’t want to be left behind, so he slithered into Pete’s backpack.  Once they got to school, Sneaker proved to be a great snake ambassador, quickly proving that snakes are not only no slimy but are quite smart.  Sneaker continued to show how amazing he was by saving a drowning toddler at the pool and getting it so that animals were welcome to swim there too.  Funny and briskly paced, this book will have great appeal for beginning readers.

Told in very simple and friendly language, this book has a strong storyline for a beginning reader.  Sneaker and Pete have several adventures in the course of the book, moving quickly from a tale of new friendship to one of real action, which is sure to please new readers.   The art by Lemaitre gives the book a vintage feel, hearkening back to Seuss and Eastman in its simple lines and bold colors.  There is also that little zing to the eyes, that feeling that the reader is in on the joke that is conveyed through the illustrations.

This is a book with great humor, a touch of vintage feel, and one cool cold-blooded hero.  Appropriate for beginning readers aged 3-5.